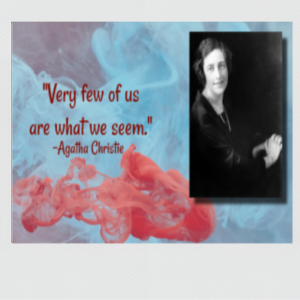 I ripped off Agatha Christie.

To be fair, her novel, The Mysterious Event at Styles, is in the public domain, which means it’s okay to do whatever with it. It’s like finding a couch in the alley with a “free” sign. If you take the couch, is that considered stealing? Of course not. However, that doesn’t mean that taking it is a smart thing to do.

Let’s say I took this metaphorical couch home, and I figured out a way to lug it into my living room. I’d still have to contend with whether it matches my other furniture. And are there lumps or broken springs? Does it smell like mold? Is there mold? Or is it a hidden gem, a forgotten about, vintage treasure just begging for a makeover?

Now, I’m not implying that Agatha Christie’s work is moldy or broken, and even if it was, who am I to fix it? I’m in no position to pass judgment on Christie’s genius, which I believe is underappreciated when it comes to literary merit. That said, I learned a few things when I adapted her novel into something that I could (sort of) call my own. The following five lessons are the reasons I’m glad that I ripped off Agatha Christie.

I’ve always been a big picture gal, and not really detail oriented. I’m not proud of this, but there it is. Originally, I thought I could go into Christie’s novel, do some gender reversals, change the setting to northern Minnesota, make the characters talk like Midwesterners from 2022. I’d switch out the handwritten notes and briefcases full of top secret files for cell phones and laptops. I thought I could just skip that bit about spilled candle wax. And don’t get me started on the ins and outs of strychnine poisoning.

Turns out that Agatha Christie is VERY detail oriented!

I had to come to terms with her attention to detail and how she masterfully manipulated that into her plot. This was a challenge for sure, but once I figured it all out, I felt like I’d completed a vigorous workout. And I was pleased with the results.

2. Trust that Your Readers are Intelligent

Christie wrote The Mysterious Event at Styles on a dare. She bet her sister that she wouldn’t be able to guess who the killer was. (I believe Christie won the bet.) Thus, red herrings abound in her novel! As I worked on my version, I kept asking myself if I should be more obvious. Like, is it enough merely to mention that Cynthia resents Emily, and that Cynthia, as a pharmacist, has access to poison? I kept thinking I should cast more doubt upon all the potential murderers, but in the end, I trusted Christie’s judgement. If she could let her readers draw their own conclusions, then so could I.

In my version of the novel, the narrator is Helen (aka Hastings), a traumatized security guard who is helping Perle (aka Poirot) find the murderer. Helen is trusting and a bit naïve, and she worships Perle. There’s a scene in the original where Poirot says some very hurtful things to Hastings, and then he makes a mess of the investigation. I wanted to skip all of that, and I almost did, because I’d grown to care about Helen, and didn’t want to see her hurt. But in the end, I let Helen have her low point, so  she could rebound. That’s essential in any good plot, but I still find it so hard to do.

4. Transitions Don’t Have to be Messy

I sometimes have a hard time getting my characters to move from the living room to the dining room without excess description, or curtailing their conversations so that they don’t ramble. I have no idea how many revisions Christie made of The Mysterious Event at Styles, but she does a great job of keeping up the pace.

Except for Poirot’s theories and explanations.

Then it got long-winded, and I believe modern readers would find some of it tedious. So, I trimmed her original 50,000 words down to 36,000, and that doesn’t include the original passages I put in. It wasn’t always easy to know what I could get rid of (see #1: Details Matter).

5. You Can Always Make the Story Your Own

I write character-based novels, where I emphasize relationships, self-discovery and redemption. That wasn’t really Agatha Christie’s style. And yet, the potential for was there on every page. All I had to do was relax, find my openings, and have fun.

In the end, Murder at Styles Resort differs from anything else I’ve written. (Actually, I’m saying that I adapted it, as opposed to writing it.) I found a great exercise to grow as a writer. Also, now I have my “reader magnet”, which means I’m offering Murder at Styles Resort as a free download in exchange for signing up for my mailing list. I hope the connection to Agatha Christie will pique readers’ interest, and that when they read it, they’ll also sense and appreciate my author’s voice enough to come back and read my original novels.