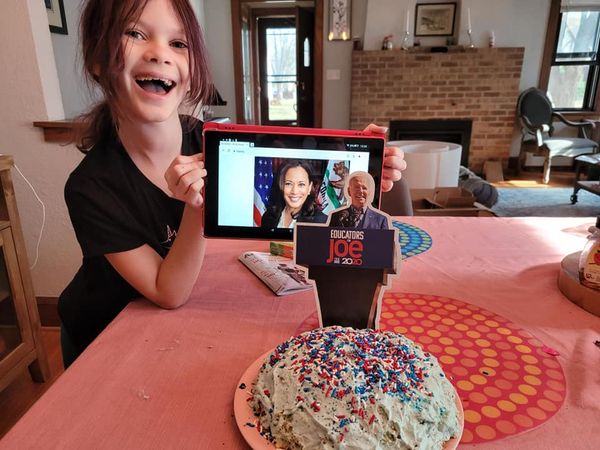 A little over four years ago, I promised Pauline, my daughter who was six at the time, that we would soon have our first female president.
Then, that damn New York Times election needle that kept moving in the wrong direction. I had a sleepless night and had to break it to Pauline the next morning that Trump would be our next president.
I went to school and saw the scared, deer-in-headlights expressions on my students’ faces. They were sure that they and their families would be deported soon. One of my favorite students literally rushed into my arms and cried on my shoulder. Later that day, I cried myself. It was during my fourth hour, reading a story to my Creative Writing class that had nothing to do with politics. A man who has regrets, who has made mistakes and who feels lost describes a dream he has: “I was running around that floor from one face of the skyscraper to another, frantic, looking through those big sheets of glass – trying to find a way to protect Superman.” (Coupland, Life After God 89)
I tend to choke up anyway, when I’m reading aloud writing that is powerful and so, so good. But that day, I felt that I couldn’t protect anyone from what was coming, and those words were a trigger. I wept.
“Ms. Osterkamp, who’d you vote for?” One of my students dryly asked.
We laughed and the moment passed.
Months later, I attended the Women’s March in Minneapolis. Three days later, I fell on the ice and shattered my elbow. I would need surgery. In the ambulance, the medic asked me the basic questions. “What is your full name?” and “What day is it?” and “Who is the president?”
I started to say “Obama,” but the realization hit halfway through, and it came out as, “O…My GOD!”
The medic shook his head and said, sympathetically, “Yeah.”
Physical therapy and the Russian probe followed.
My elbow healed but will never bend like it used to. The metal plate the surgeon inserted will always cause my arm to ache. And Mueller wasn’t nearly aggressive enough. And Robert Barr should be ashamed.
Then there was the Stoneman Douglas school shooting. I chaperoned students who wanted to protest at the capitol, and planned to bring with me my son, Eli, who was in middle school at the time. Pauline was upset, wanting to go too. “I want to do what’s right,” she said.
Months later, I picked her up at school, and she told me she’d learned about Abraham Lincoln. “I want to be like him,” she said. “I want to make the world a better place. When I grow up, I’m going to be mayor.”
Months and years passed. Brett Kavanaugh was confirmed. AOC was elected. Trump was impeached over his dealings with the Ukraine, and Adam Schiff and Nancy Pelosi were my temporary heroes.
Pauline had four birthdays. She grew, she formed opinions, and she still plans to be mayor. When George Floyd was murdered in our city, she cried, and helped me write letters to our elected officials and select which social justice causes we should donate to.
Covid 19 kept us isolated. Trump insisted it was a hoax, or that if we just drank some bleach, it would all go away.
“Vote like your life depends on it, because it does!” That was not hyperbole.
Everyday, I grew sure. We would be doomed if Trump was elected again.
Pauline and I would go for walks in the afternoon and look at all the yard signs. They were all for Biden & Harris, with a few RGB memorials thrown in. “What will we do if Trump wins again, Mom?”
“We’ll turn off the news,” I replied.
“We could just build a protective bubble around our house,” she added.
“Don’t worry,” I said. “Trump isn’t going to win.”
On election night Florida goes fast for Trump. I have a sinking feeling I will need to tell Pauline I was wrong, again. I warn her when I put her to bed. She seems unfazed.
Then, thank God, Wisconsin and Michigan go for Biden the next day.
Pauline and I ride our bikes through the neighborhood, looking at the yard signs for what might be the last time. Biden and Harris.
“Do you know what we’ll have if Biden wins?” I ask her.
“Cake?”
I laugh. “Sure, we can have cake. But I was going to say, we’ll have a woman vice president.”
I am glued to the television for the next three day and I look at Twitter so much I pinch a nerve. I am still in pain.
But by Friday we’re making our victory cake. It falls apart when it comes out of the pan, but the next day when the election is finally called for Biden. Pauline and I scoop the broken cake together and paste it up with sweet, buttery frosting.
We eat it while watching Harris speak. She says that little girls should know they can grow up to be whatever they want to be.
Pauline squeezes my hand.