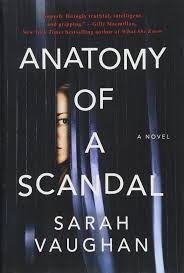 Anatomy of a Scandal by Sarah Vaughn
format = Kindle

Anatomy of a Scandal by Sarah Vaughn is all about politics, and the politics plus everything else about the book is 100% British. I say 100%, because I feel like a lot of the books I read by British authors, which are often set in London, are still somehow written for an American audience in mind. Not this book. I had to re-read many passages to understand the terms or slang I wasn’t familiar with. Much of the novel is set at Oxford, and Vaughn assumes her reader will understand the vernacular associated with the institution, or with British higher education in general. The same goes for parliament and the English justice system.

This speaks well for the novel. I never felt that Vaughn was underestimating her readers, and when there’s a twist, it’s well-timed, well-executed, and it was a total game changer that I did not see coming, but which was entirely plausible. That is so rare; not since Gone Girl have I felt that a twist was as well done.

The premise of the novel goes like this: Kate is a barrister who prosecutes sex-related crimes. She takes on a case of rape charges against government official/close friend to the Prime Minister James, who seemingly had a perfect marriage to his wife, Sophie. Sophie knows James was having an affair with the woman who accuses him of rape; she knows because he confesses it. But did he rape her? Sophie doesn’t want to believe it, but her doubts begin to grow and she questions the nature of her relationship with James.

Sounds like a simple plot, but there are so many layers and secrets to be revealed. I especially enjoyed the flashbacks to their days at Oxford, and learning more about the relationship dynamics between all the characters. This is a smart, suspenseful novel that I didn’t want to end.
​
If you like books about politics and relationships with flawed, complex characters told in multiple points of view, then you will love Anatomy of a Scandal.