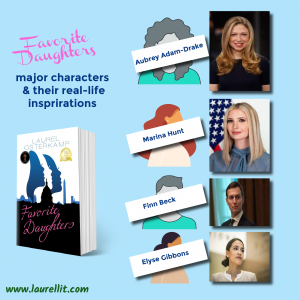 In a previous post I wrote that my original inspiration for Favorite Daughters came from the surprising friendship between Chelsea Clinton & Ivanka Trump. I thought I’d expand on that a little, and give y’all a sneak peak into my major characters and their real-life inspirations.

I’m a Chelsea Clinton fan, so I wanted to make the character inspired by her, Aubrey Adam Drake, sympathetic and compelling.

While Chelsea is the daughter of an ex-President and a former Senator/Secretary of State, Aubrey’s background is a bit different. Her grandfather was once President, and he’s created a political dynasty, with Aubrey’s mother and uncle both vying for Congress and eventually, the Presidency. Meanwhile, Aubrey’s father is royalty from Liechtenstein. Aubrey faces a lot of pressure to enter politics herself, and her biggest challenge is finding a way to say no to her grandfather.

Key Quote: “What if, with all my privilege and opportunity, I was born with this obligation to do good? And if fixing the world isn’t my job, then whose job is it?”

I won’t lie; I don’t like Ivanka Trump. And yet, since she inspired a character in Favorite Daughters, Marina Hunt, I needed to make her three-dimensional. It was important that she came off as flawed, but also occasionally sympathetic. Like Ivanka, Marina’s relationship with her father is complicated and a major factor in her life. She is used to living in the public eye, and she’s good at creating an image and seeming like she has it all together. But Marina has a secret, and she’s vulnerable in ways you would not expect.

Key Quote: “Did I break some unspoken sisterhood code by hooking up with him? I’m asking honestly because I don’t always understand the rules that everyone else just seems to get automatically.”

When I began writing Favorite Daughters, Jared Kushner was a complete enigma. He was first known as the son of a Democrat, albeit one who went to jail in connection to illegal campaign contributions. He was the handsome yet soft-looking man by Ivanka’s side, whose picture was omnipresent, but who never seemed to speak in public. And he was given a ton of responsibility by Donald Trump.

Now, he’s slightly less mysterious, although not by much. Finn, his alter-ego in Favorite Daughters, is also written as a mystery. He’s actually the love interest of my protagonist/narrator, Elyse Gibbons, and it takes her pretty much the entire novel to figure him out.

Key Quote: “I’m no better, Elyse. I let them use me too, and I enjoyed the benefits. But you’re wrong if you think Marina understands me. She’s not capable of understanding anyone, not even herself. But you, you’ve always seen me for exactly who I am.”

The connection here is very lose. Originally, Elyse was entirely made up. It wasn’t until my fourth or fifth revision that I gave her some of AOC’s qualities. Mainly, I liked the idea of her magnetism, that she could project such strength and poise, and rise so quickly in the world of politics, even though she was an outsider.

Key Quote: “If you’re aware of my existence, chances are you either love me or hate me. But I am here to tell you this: I am not important. I don’t think politics is about individual leadership, but it should be about finding the wisdom and moral courage to do what’s right.”

Have you read my adaptation of Agatha’s Christie’s novel, The Mysterious Event at Styles?

You can download Murder at Styles Resort just by subscribing to my newsletter. I won’t fill up your inbox (promise!) and the download is safe & secure.