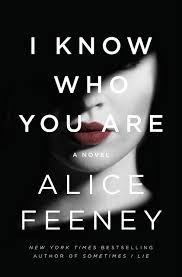 I Know Who You Are by Alice Feeney
Format: Kindle

I really enjoyed Feeney’s first novel, Sometimes I Lie, and I admit to being a fan of the British psychological thriller with a flawed heroine and a twist ending (which her first novel totally was), so I climbed on board for her second novel.
The story is about Aimee, a rising screen actress whose marriage is falling apart. At the beginning of the story, Aimee and her husband Ben have a fight, and then Ben promptly disappears, leaving his phone and his car keys on the kitchen counter. Aimee does what anyone would do in that situation and calls the police. Problem is, the more the police dig, the more evidence they find that Aimee murdered Ben. Plus, Aimee’s situation grows increasingly complicated, as we learn that she has a stalker, AND that she was kidnapped and abused as a child, that she doesn’t remember things well because of the trauma she suffered, and Aimee isn’t even her real name, since the couple who kidnapped her forced her to take the name of their dead child.

By the end of the novel, I was skimming just to get through and find out the end. I wanted to like it, but there were too many problems with this book for me to say that I did. First, there are inconsistencies and plot points that are never explained. Second, some of the abuse described in this novel is beyond disturbing and the effects it would have had on Aimee are never dealt with, so the descriptions are nothing more than gratuitous and unnerving. Finally, the “twist” at the end is so unbelievable and ridiculous (and also disturbing), it made me wish I’d never read the novel at all.

All that is not to say that Alice Feeney is not a good writer. She knows how to set a scene and build suspense, and I did at least enjoy most of the present-day Aimee scenes. (The scenes where child Aimee was kidnapped and abused were not enjoyable however.) Feeney also has some profound passages about the nature of life, loss, and identity, that are nearly poetic in their eloquence. I just wish she’d written them into an entirely different novel.
Unless you don’t mind scenes of abuse, incest, gratuitous violence and highly implausible twist endings, I’d skip I Know What You Did.