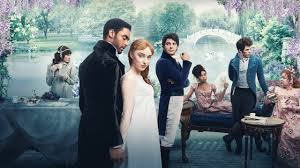 For my birthday, I was given a subscription to Master Class, which is great, because I am the sort of person who reads course catalogs for fun. When I first logged on to Master Class, I was asked to click on the courses I was interested in, and, well… if Master Class was a dating site, I’d be that gal who right swipes for anyone who has a pulse & doesn’t appear to be a serial killer.

I was especially eager about the cooking courses and the writing courses. I’ve already learned how to make elevated scrambled eggs from Gordon Ramsey (hint – make sure you have some sea urchin lying around) and there are so many writing courses that look good, it is hard to know where to start. Logically, I should choose a novelist like Judy Blume or Margaret Atwood, since their work is close to what I strive for.

But no. I chose Shonda Rhimes because when I started her class, I was in the middle of watching Bridgerton.

Now, you have to understand my morning routine. I get up. I scour the news. I try to write for around 20 minutes. Then I work out. If it’s not icy out and it’s not super cold, that means going for a run. But, as I live in Minnesota and it’s February, for now that means I work out in my basement and I watch something on Netflix to divert myself from all the exertion.

Bridgerton was a great diversion.

Shonda Rhimes is a master at creating compelling plots and characters, and I wanted to learn her secret sauce. So I chose her as my first Master Class instructor, even though her class is about writing for television and not about writing novels.

Oh – one other pertinent piece of info: I’ve decided that now that Trump is out of office and it no longer feels necessary to scour the news when I first get up, that I’ll use my freed up time to get in some Master Class instruction instead. So, for a few glorious mornings, I listened to Shonda espouse her wisdom, and I then would go downstairs, mount my elliptical machine, and witness the fruits of her genius. Too bad there were only eight episodes of Bridgeton available.

Now, as it is early in the morning when I view her classes, I may be a little fuzzy on the knowledge she has espoused. But one particularly interesting nugget was about supporting characters, and how they must work together to form a whole. She compared her characters on Grey’s Anatomy to the Wizard of Oz – Meredith needed a home, Christina needed a heart, Issy needed a brain, and George needed courage.

I still can’t quite grasp all that, And I try to apply it to Bridgerton, which like Shonda Rhimes’ other shows, has a great cast of characters. I’m pretty sure Eloise is the one on the quest, and Lady Danbury is the voice of authority and reason. I’m not sure where the brother characters fit in, but does it really matter? In this show, the men are more the eye candy, there to support the strong cast of female characters in their various pursuits. How refreshing.

I am trying to apply Shonda’s wisdom to my own work. If I can make the novel I’m working on now Shonda Rhimes-like, then I’m making it more marketable. I’m making it better.

Writing novels and writing for television share a major similarity, in that they are written in chapters. These chapters have a structure and rhythm, and while their focus may vary, the tone should remain the same. Suspense and intrigue should build slowly so that revelations can happen all at once. In Bridgerton, there is the diary voice over of Lady Whistledown, done by Julie Andrews, that helps in that department. But really, the show works because all the elements of character, plot, and structure come together beautifully.

Well, it is about that time of morning when I should get off my couch and go work out. In a few minutes I will turn on Get Even, which is a British series based off of a novel series by Gretchen McNeil, about these private school girls who form a secret society of vigilante justice, but then they get framed for murder.
​
It’s almost Shonda Rhimes like in its juiciness. Now if only I could come up with something as good.