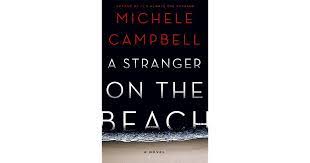 I listened to Stranger on the Beach on audio, and the fact that this book is narrated by January Lavoy affected how good I think it is. Lavoy narrates lots of books and she’s excellent – so good, that she made Sweet Valley Confidential sound like quality writing. And for that reason, I couldn’t tell if Stranger on the Beach was a decent book with some notable plot holes and several flaws, or if was just really, really bad.

The story is about Caroline Stark, who feels empty because her daughter left for college and her husband isn’t around much. But she has this gorgeous beach house that she’s building, as in, she’s paying people to build it for her. Caroline is trying to establish herself as an interior decorator, so I guess she’s decorating the home herself. Anyway, poor Caroline feels empty and sad in this huge, beautiful house, and then her husband is all, “I have to divorce you because I’m in big trouble and there’s no other way out,” and this is after he brings a strange Russian woman to their party. He also drains all their large bank accounts. I hate it when that happens.

Caroline does what any hot-blooded, pre-menopausal woman would do, and hooks up with Aiden, a gorgeously misunderstood bartender. It only takes Aiden one night to decide Caroline is the love of his life, and nothing that happens can sway him against her. And believe me, A LOT happens. Murder, hurricanes, meddling relatives… it’s all there. We hear both Caroline’s and Aiden’s version of what goes down, and one of them is lying. The question is, who?
Except, it’s so obvious who is lying. Also, I don’t consider myself particularly adept at figuring out plot twists ahead of time, but this one was so crystal clear, and I was hitting my forehead, wondering how the police characters could be so dense not to figure it out. The answer is, they wouldn’t have been that dense, so there’s another plot hole to add to my list. (I won’t share the list because I don’t want to give the story away. Maybe my review will make the book sound good to some readers?)
None of the characters were likable, and Aiden was so lovestruck it defied belief. I guess Caroline Stark must have had it going on, but he was willing to sacrifice everything for her, after an affair with her that lasted only a couple of days. Also, he talked like someone from a 1930s film noir. I’m not from Long Island, so maybe people really do talk like that, but I had trouble buying it.

Still, the writing is competent, and the moody atmosphere is effective, and I’m sure the film noir dialogue was a choice, because the whole book alludes to movies like Double Indemnity and The Third Man, while using classic film noir motifs, like femme fatales, paranoia and betrayal, and unreliable narrators with mysterious pasts. And in that way, the novel works. It just didn’t really work for me.