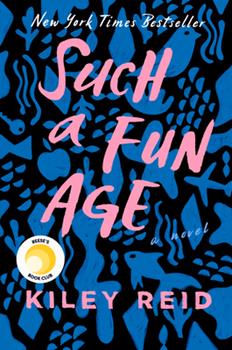 I heard about Such a Fun Age several times, but it wasn’t until I saw it listed as one of 2020’s best novels that I finally paid attention and downloaded it. I’m so glad I did, because it was one of the best novels I’d read in a long time.

The premise is fairly simple. Alix is a wealthy white woman who started her own business by writing letters, mostly to companies, asking for free merchandise. But she somehow turned her letter writing into a woman’s empowerment venture, and now Alix gives workshops on cover letter writing, she has scored a book deal, and she is involved in Hillary Clinton’s campaign (the novel takes place in 2016). Alix is also a mother of two young daughters, so she has hired Emira, a twenty-five year old African American woman, to babysit her older daughter, Briar. Emira is very bright but also aimless, and while she loves babysitting Briar and is very good at it, Emira also knows she needs a salaried job with health insurance.

At the beginning of the story, Emira does some late night emergency babysitting and takes Briar to an upscale grocery store, where Emira is accused of kidnapping Briar. One customer, a man named Kelly, films the whole incident, and later, he and Emira start dating.

Then, it turns out there are all sorts of tangled webs, hidden motivations, and complications that ensue. Throughout the novel I kept asking myself, “Who is worse? Alix or Kelly?” The answer to that is complicated and it keeps changing, and in the end, the story is more about challenging our own preconceptions on race, class, friendship, and loyalty. One thing author Kiley Reid does exceptionally well is illustrate how vastly a story can change depending on the perspective of the person who is telling it. That, and that we are always the heroes in the stories we tell about ourselves.

I saw parts of myself in Emira. I also saw parts of myself in Alix, though I didn’t want to. Working where I do, in a public high school that is highly diverse and mostly low income, I try to constantly check in with myself and be aware of my white privilege. I resist becoming a “Karen” – though I hate that term. Nobody should abuse their power, but women are criticized for doing so far more than men. With men, it’s assumed they’ll use their power. But a woman using her power? She’ll be condemned. Alix is also aware of the dangers of becoming a “Karen” and I could connect at times with her well-meaning cluelessness, even if ultimately, she makes unforgivable mistakes.

Anyway, this story is so good; it’s riveting and layered and surprising. The writing is superb and never condescends. It also gives the reader so much to think about and perhaps, to learn from as well.

If you’re a human with a half (or more) of a brain, you’ll love Such a Fun Age.