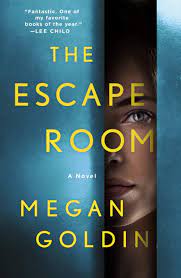 Nearly two years ago, before Covid 19 was a thing, my son Eli and I went to an escape room together. I had bought a Groupon, thinking it would be a fun mother/son activity, especially since Eli’s good at solving puzzles and I’m good at being a sidekick. I remember that he’d just had his braces put on that morning and that I’d injured my knee, so neither of us were in top form, and it was our first escape room ever and we were the only two people there. We tried to solve the clues, while he winced in pain and I hobbled around. We didn’t get very far, and we failed to complete the puzzle before the time was up. The guy running it was very nice; he showed us all the clues we’d missed and the secret passage we would have seen had been a bit more quick and clever, and then he reassured us that we did a good job for first-timers on our own.

I already look back on that day with nostalgia. That was before Eli was too busy with his teenage friends to want to do an escape room with me. That was back when doing something like an escape room – you know, rifling through non-sanitized objects in a poorly ventilated environment – was still possible. It’s a fond memory, made all the rosier after comparing it to the escape room described in Megan Goldin’s novel of the same name. I don’t know that I normally would have been drawn to this book, but it was an Audible daily deal narrated by one of my favorite voice actors, so I figured, why not? And it was great!

Throughout the novel, Sun Tzu’s The Art of War is referenced. “Pretend inferiority and encourage their arrogance.” and “The supreme art of war is to subdue the enemy without fighting.” It’s related to the world of investment banking, and the dog-eat-dog environment that investment bankers work in.

The main character is Sarah Hall. She tells her story in first person POV –  how she came to work at a highly prestigious and competitive financial firm. We can see both her rise and her downfall come from a mile away, and yet it also feels so unexpected, mostly because of the casual cruelty, selfishness, and misogyny of the people she works with.  She remarks at one point, “There was always an undercurrent of conflict in the firm. The air crackled with a permanent sense of distrust. In the firm’s toxic worldview, conflict was good. Conflict made people work harder and smarter. It made them ruthless.”

At chapter breaks, the narration would switch to present day, 3rd person POV. Then we’d be in the elevator with the ruthless team Sarah had worked with, only Sarah isn’t there. Is she dead? Was she fired? It takes a while to find out, and it’s all done through slow reveals and character portraits of Vincent, Sylvie, Sam, and Jules (Sarah’s former coworkers). Each of them is hiding something, and they’re all stuck in this elevator that they’d thought was an escape room/team building exercise. They’d assumed they just needed to solve a few clues and they’d be out in an hour. At one point, one of them figures out a clue by deciphering a code, revealing the question, “How much do you trust each other?”

Of course, the irony is that nobody trusts the others, and none of them are worthy of trust. As time goes on, the elevator situation becomes more dangerous and more dire, until Sylvie, Sam, Vincent, and Jule’s very survival comes into question. Yet, as the chapters switch back to Sarah’s story and we learn of all the horrendous ways they treated her, we wonder. Do they deserve to survive?

This novel had me guessing until the end, and it was fun to learn about something I know almost nothing about – the cutthroat nature of investment banking. The only downside to reading this novel is it will make you want to stay away from elevators, but hey – especially during a pandemic, it’s healthier to take the stairs anyway.