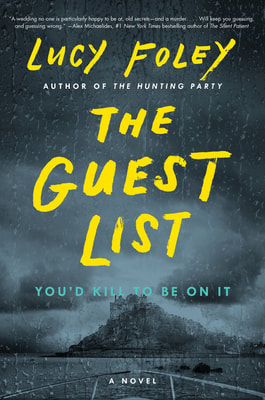 The Hunting Party by Lucy Foley
​Format: Kindle
​Reading The Guest List, by Lucy Foley, seemed like a no-brainer. First, I read The Hunting Party and I got super-involved in the suspense and atmospheric what will happen next vibe Foley is so good at. The book description for this one read like an Agatha Christie novel, and after reading Kate Weinberg’s The Truants (which featured an Agatha Christie fetish), I was ready. I was ready and I was not disappointed.

The story is about Jules and Will, and their getaway wedding on an island off the  Irish coast. Will is a reality TV star (his show is called “Survival” which is all about him surviving in harsh circumstances) and Jules is a big deal in publishing, and she’s worried there will be unwanted publicity at their nuptials. In truth, that’s the least of her worries.

First of all, how come I’ve never been invited to a wedding like this? Pre-Covid (and it’s hard to imagine now) the type of wedding I got invited to was thrown by my cousin or by my best-work friend,  and it featured a quick ceremony with self-written vows, followed by a reception at a golf club or in the backroom of a hotel or restaurant, where they served baked chicken covered in some sort of sauce, the bar was open but the drinks were weak, and the night’s climax was ironic dancing to “Celebration”.

But they held neither the intrigue nor the atmosphere of Jules and Will’s wedding, which was on a broody island full of craggy cliffs and quicksand, and the intrigue of “I don’t know who can I trust” among the wedding guests with their beautiful-people problems, and their decadence, their lies, and  their numerous “I’m too wealthy and good looking for my own good” sorts of issues.

Here’s how the novel is set up: At the beginning, we know SOMEONE is dead, but we don’t know WHOM. Then the chapters’ POV switches around. We hear from the wedding event planner, the best man, the maid of honor/sister of the bride, the wife of the bride’s BFF, and the bride herself.

​Someone is dead. Someone is guilty. Secrets are revealed. Revelations jump from the pages. Characters make mistakes that had me shouting, No, Don’t Do It!

In the end, it all comes together, and if the resolution is not entirely happy, it left me satisfied. Foley’s writing is fine tuned and her plot and characterization are adept.

I highly recommend The Hunting Party. It was a fun book to read, and  probably the closest I’ll ever get to a beautiful-people wedding where murder is on the menu.