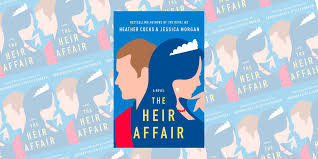 The Heir Affair (The Royal We Book 2) by Heather Cock and Jessica Morgan
Format: Audio

This second novel follows The Royal We, in which all-American tomboy Bex studies at Oxford, and falls in love with Prince Nicholas, who is second in line to the throne. Their romance is a roller coaster ride, made more complicated when Bex’s twin sister Lacey, and Nick’s younger brother Freddie, interfere. But (spoiler alert) Bex and Nick get married at the end, though their wedding was not the perfect fairytale ending for which they’d hoped.

The Heir Affair picks up where The Royal We left off, with Bex and Nick trying to find their footing as a married couple, dealing with an angry population, hungry gossip columnists, and tons of family drama. Still, Bex and Nick find a way to strengthen their bonds with both family and friends who appeared in previous novel, and the ups and downs of their relationship seems plausible and is also plenty entertaining.

I loved the first novel and I equally loved the second. With both books, I went in thinking, “This is so long! Why didn’t their editors insist they take stuff out? Are all the little anecdotes really necessary to form the plot?”
Yet by the end, I realized both times that they were. I didn’t think any part of either book was boring or unnecessary. Instead, I could savor in a nuanced story that takes its time laying the foundation for a complex plot, driven by flawed yet compelling characters, who have seemingly real motivations for making the choices they make.

The Heir Affair both continues the story of Nick and Bex’s romance, but also draws upon the history of Queen Elanor’s marriage, and upon the tragic past of Eleanor’s sister, Georgina. Nick’s younger brother Freddie and their father, Richard, are also spotlighted. I do not claim to be any sort of expert on the real royal family, but I browse the headlines enough to see some parallels between truth and fiction, and thought the authors did a great job of bringing both relevance and a sense of history to the book. All this builds to an emotionally satisfying conclusion. Also, I listened to this book on audio, and the narration by Christine Lakin was excellent.
I highly recommend The Heir Affair!