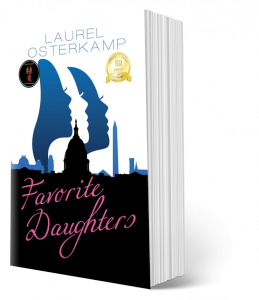 Inspired by the friendship between Ivanka Trump and Chelsea Clinton, Favorite Daughters examines whether power and privilege are worth the price.

Elyse Gibbons is out of her depth when, as an undergrad at Columbia, she’s befriended by campus superstars Aubrey Adam-Drake and Marina Hunt. While Aubrey’s grandfather is a former U.S. president and Marina’s dad is a notorious mob lawyer, Elyse was raised in Pennsylvania by a single mother/language professor who made Elyse learn Chinese for allowance money. As her high-profile life evolves, Elyse must use the strength and perseverance she gained from her humble roots, even while joining ranks with the powerful and elite. Then, handsome and enigmatic Finn joins the three friends to form a tightly knit group of four, and life becomes even more complicated.

Years go by, Elyse is further drawn into Aubrey and Marina’s world of influence and intrigue, and she will risk everything for her friends and for Finn—the love of her life. When Elyse becomes embroiled in her own political career, it’s clear that one misstep can lead to earth-shattering consequences, one lie can cause devastating ruin, and to survive unscathed, betrayal is the only option.