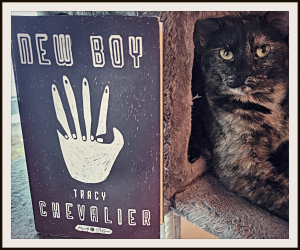 Reading New Boy, a modern Othello, was disturbing yet enthralling. I felt like I was in a speeding vehicle as it barreled down the road. I wanted to hit the brakes but knew the inevitable crash was coming. Yet, I couldn’t stop reading, even as I knew the ending would be tragic. It left me feeling extremely unsettled, but in a good way. Author Tracy Chevalier set the story in a 1970s schoolyard playground, and that was pure genius. Everything is so much more intense and immediate for children. All the emotions were heightened, as were the stakes. Nearly fifty years later, there is certainly still racism,  but perhaps not as overt? Funnily, I attended fourth and fifth grade at a suburban school outside of D.C. (Reston, VA.). It was about ten years after this story was set, but I thought back to those times, trying to remember. I don’t remember my black friends being ostracized because of their race, but what did I know? I’m sure there was a lot I missed.

Anyway, the parallels between New Boy and Othello were brilliant. There’s a strawberry pencil case instead of a handkerchief, which begins as a lover’s gift and turns into the vehicle for false incrimination. The characters’ names and their places in the playground hierarchy are represented well. Especially with the teacher, Mr. Brabant  is racist and becomes a paternal figure to Dee/Desdemona. All of it fell into place so easily, though that’s from a reader’s perspective. I wonder how hard Tracy Chevalier labored to make it all work.

The best part, to me, was that she bridged that “motivation gap” which has always bothered me about the play. In this modern Othello, it is made clear how Dee can sacrifice everything for a boy whom she barely knows, and who intends to harm her at the end. We understand the evil intentions of Ian/Iago. We gain insight into Osei/Othello’s mindset, and why he chooses to believe Ian/Iago over everyone else. And Mimi/Emelia’s desire to please Ian/Iago is also made clear. It’s devastating, but definitely a powerful, worthwhile read.

Ian/Iago: He feels that his place in the playground hierarchy is threatened when new boy Osei shows up. But he is also a power hungry bully who props himself up by bringing others down. There’s speculation that his father abuses him (when a kid shouts out that Ian’s father disciplines with a belt) but other than that, there isn’t a lot to suggest his backstory is to blame. Ian gets off on hurting others. “The simple power of his words had transformed the black boy into a cold statue, the white girl hanging off him, carried along by the giddiness of her emotions so that she seemed willfully unaware of any change in her boyfriend. Ian waited to see the hurt enter her like a knife.” (Chevalier 123)

Mimi/Emelia: At first I questioned Chevalier’s interpretation of Emelia in Mimi. She is described as weird and dreamy, and she comes off as sort of passive. As the novel goes on, however, Mimi emerges as the unsung hero, which is how it should be. I also loved that Mimi has a legitimate, concrete motivation for giving that pencil box to Ian, and that we get an explanation for how she starts “going with” Ian in the first place. The wisest, most perceptive words come from Mimi’s mind. “He reminded Mimi of a young boy caught in the act of doing something naughty – a knave, she thought drowsily –and closing his eyes, thinking if he couldn’t see anyone, maybe no one could see him.” (Chevalier 201)

Osei/Othello: It is here that Chevalier’s writing is heroic, even if her main character is not. As a writer, I find it very difficult to let my protagonists make heart-rending mistakes. I find it even more difficult to let a character who is smart, brave, and kind at the beginning of the story, do hurtful or unsympathetic acts by the end. Osei is so likable at the beginning. I was rooting for him! But by the end, the only characters I find more upsetting are Ian, Rod, and Mr. Brabant.

Dee/Desdemona: I liked Dee a lot better than I liked Desdemona. She has a strength and spirit that I didn’t pick up on while reading the play. However, that may be because of the lens I was reading it through. Having access to Dee’s thoughts, gave me an understanding of how brave Desdemona is, to forsake her father and marry Othello, in the face of all that racism. The difference is, Dee has more of an awareness of the dynamic between her and Osei. “She should be glaring at him –maybe move across to Casper’s empty seat at the next cluster. Other girls would do that.” (Chevalier 174)

New Boy is an original, risk-taking modern Othello. Some might assume that since it’s about kids, it’s meant for a younger audience. I disagree. Teenagers could definitely appreciate the novel, but adults are bound to see their own petty, selfish behavior reflected back at them. They’ll be forced to ask themselves, when they act this way, are they being childish, or are they just acting off their worst human instincts, like so many adults do?