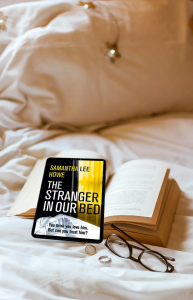 The Stranger in Our Bed, a psychological thriller, was a huge success

The Stranger in Our Bed, by Samantha Lee Howe, became a USA Today bestseller and it’s been made into a movie. It has over a thousand four or five star reviews on Goodreads, so Samantha Lee Howe is doing pretty well. If she wasn’t, I wouldn’t write a critical review like I’m about to write, where I dissect what I didn’t like. But I figure if she sees this post (which is very unlikely), she can stomach the blow because everyone else seems to love her book.

It’s not that I didn’t enjoy it. I agree that it’s definitely a page-turner. But the entire time I was reading it, I was also asking myself, How can something so bad be this entertaining?

Okay, here’s the premise: Charlotte, a super-star law student at the top of her class turns down an amazing job offer to marry Tom and become a corporate wife. Tom and his mother, Isadora, are both controlling and make every decision for Charlotte, including when she ought to have kids and whether or not she should breastfeed. Tom doesn’t understand why Charlotte seems unhappy, and nobody, including Charlotte, ever thinks to suggest that Charlotte might be more fulfilled if she could have a career of her own.

Instead, Charlotte starts an affair with this guy named Ewan, who convinces Charlotte to leave Tom. But then, Ewan seemingly slips off the face of the earth, and Tom takes Charlotte back.

Charlotte, who is supposed to be brilliant, never can figure out a way to actually leave Tom, and instead she just goes along with whatever he wants. After she has a miscarriage, she doesn’t say anything when he has her committed for a week or so. She finds evidence that Tom is having her followed but buys his explanations at every turn. She agrees to move to their country home with its creepy servants, Old Freddy and a Mrs. Danbury wannabe. When Tom hits Charlotte, she excuses the action. And when he’s obviously drugging her, she excuses that too.

Now, I know that plenty of smart, capable women become trapped in abusive relationships, but that’s not how this story reads to me. Instead, Charlotte, who doesn’t really love Tom, keeps giving him the benefit of the doubt because…well, I’m never sure why. She could leave but she chooses not to. Charlotte’s confusing motivations and lack of agency is, in my mind, the main problem with the novel.

Also, I was miffed by the writing style. Howe is great at pacing and moving things along, which I believe is why the book was a hit. But she constantly goes against the rule of showing vs. telling, with lines like, “My behavior was suspicious, but I didn’t really know how to act in this situation. Over the past few months of my affair with Ewan, I had always been able to visit him unobserved.”

And then at the end, there’s this huge info drop, where a minor character sort of vomits out the ending. It was odd.

Samantha Lee Howe got lots of Positive Reviews on Goodreads.

All that said, I read the entire book and I was intrigued, wanting to know what would happen next. I can’t say that I recommend it, but lots of other readers can.

See Their Reviews on Goodreads