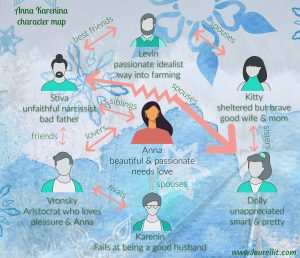 So, I took the plunge and began reading Anna Karenina. I’ve decided to document my reading experience, summarize & analyze some parts, and adapt what seem like pivotal scenes using a modern tone & first person POV. Look at it this way: If you’ve always been tempted to read the novel but something is holding you back, now I can read and experience it for you.

A couple of thoughts: The Russian names ARE confusing, but you get used to it. Also, I created the character map (see above), and that helps. Each of these main characters get passages or entire chapters where their POV is expressed through third person limited. But the one who is almost always described through other characters eyes? Anna Karenina. Maybe that will change?

She doesn’t appear at all in chapters one through nine. Here’s my rundown of those chapters: 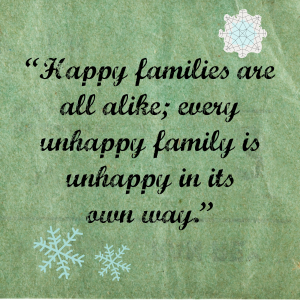 Anna Karenina is regarded as a tale of passionate love. And yet, its first (and possibly most famous) line forebodes trouble in paradise. A marriage is on the rocks, and it’s all because of adultery.

And just to throw the reader for a loop, it’s not our title character/heroine who is the cheater. It’s her brother! Stiva (Stepan Arkadyevitch) was caught cheating with the nanny. The worst part? He’s such a fun, charming guy who’s aware of his own shortcomings, that you can’t really hate him for it.

Well… you could hate him if you were his wife, Dolly. I love this passage because it beautifully illustrates Dolly’s anguish, and Stiva’s self-awareness.

This idiotic smile he could not forgive himself. Catching sight of that smile, Dolly shuddered as though at physical pain, broke out with her characteristic heat into a flood of cruel words, and rushed out of the room. Since then she had refused to see her husband.

“It’s that idiotic smile that’s to blame for it all,” thought Stepan Arkadyevitch.

But Stiva is sorry/not sorry. He feels like his wife (who is the same age as he is) has become old and unlovable, so what’s he supposed to do? There just isn’t any solution.

Dolly is all up in her feelings about the whole mess, and she’s brutally honest to Stiva:

“You are loathsome to me, repulsive!” she shrieked, getting more and more heated. “Your tears mean nothing! You have never loved me; you have neither heart nor honorable feeling! You are hateful to me, disgusting, a stranger—yes, a complete stranger!” With pain and wrath she uttered the word so terrible to herself—stranger.”

Stiva is forced to sleep on the couch, but it’s Dolly who is truly suffering. Meanwhile, Stiva goes to work at his cushy desk job as if nothing is wrong. He has a way of floating through life. I think Tolstoy’s way of characterizing him here is masterful:

“Aha! Stiva! Oblonsky! Here he is!” was almost always said with a smile of delight on meeting him. Even though it happened at times that after a conversation with him it seemed that nothing particularly delightful had happened, the next day, and the next, everyone was just as delighted at meeting him again.

Then, we meet one of the story’s protagonists–the one who didn’t get the book named after him: Levin. Levin and Stiva are old friends, and they have a nice conversation where Stiva tells him that he’s in town to hit on Stiva’s sister-in-law, Kitty. Levin is a very nice farmer who is also excellent at skating, AND he’s capable of profound thought. I get the feeling we’re supposed to think he’s a better guy than Stiva, but maybe not by much.

When Levin expresses insecurity about capturing Kitty’s heart, Stiva tries to be encouraging, but Levin isn’t buying it.

He had heard that women often did care for ugly and ordinary men, but he did not believe it, for he judged by himself, and he could not himself have loved any but beautiful, mysterious, and exceptional women.

Later, Levin meets with his brother Sergey. Sergey is an intellectual, and I believe his purpose in the novel is to provide philosophical thought. Sergey and Levin talk about the purpose of industry and society and…okay, I kind glazed over during that part. But I liked this quote, because it helps me understand the Russian mindset:

“We Russians are always like that. Perhaps it’s our strong point, really, the faculty of seeing our own shortcomings; but we overdo it, we comfort ourselves with irony which we always have on the tip of our tongues.” (Sergey to Levin)

Then comes an exciting scene! Levin goes ice skating because he knows that Kitty is going to be there. I have adapted the scene using first person POV and a modern tone. 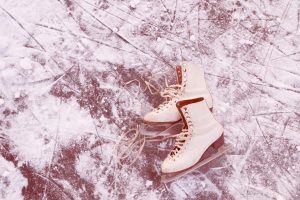 “The Skating Scene” as told by Levin

The first person I see is Kitty’s cousin, Nikolay. He’s just leaning against the fence, wearing his skates but not skating. He yells to me, “Dude! It’s Russia’s best skater. When’d you get here? You should put on your skates. This ice is BOSS.”

“I didn’t bring my skates,” I tell Nikolay, but I’m consumed by the nearness of Kitty. I see her but I’m not looking at her, and it’s like the sun itself is approaching me. She’s in a corner, timidly turning out her slender feet in their high boots. A little punk in Russian dress desperately waves his arms around and nearly falls on his ass right in front of her. She almost trips, and takes her hands out of the little muff that hung on a ribbon around her neck. She holds her hands out like she’s trying to avert an emergency, and that makes me want her, bad. Then she sees me, smiles, and I want her even more. When she gets around the turn, she gives herself a push off with one foot.

She’s even hotter in real life than how she is in my fantasies.

It used to be that when I thought of her, I’d see an enhanced photo in my mind, like her charming little fair head which sits so perfectly on her girly shoulders, and that face I dig, because it’s so bright–it’s the face of someone with a wicked sense of humor. Her childlike expression combined with her beautiful, delicate figure just makes her doubly awesome. But what really gets to me about Kitty? It’s something most people wouldn’t know to look for, like the expression in her eyes–soft, serene, and truthful, and above all, her smile, which always transports me to an enchanted world, where I become soft and tender but in a good way, like I’m a little kid again.

“Have you been here long?” She gives me her hand before I can respond. “Thank you,” she adds, as I pick up the handkerchief that had fallen out of her muff.

“I? I’ve not long…yesterday…I mean today…I g-got here.” Seeing her makes me so emotional that I’m reduced to stuttering. “I was meaning to come and see you.” Then I remember why I’d meant to come see her, and I get confused. And, dammit, I feel myself blush!

She ignores how awkward I am, and says, “I heard that you’re a really great skater.”

“Yeah, I used to be passionate about skating; I wanted to be, like, Olympics level.”

“You do everything with passion, I think,” she says, smiling.

Damn. If that’s not flirting, I don’t know what is.

“I want to see how good you are, Levin. Put on skates, and we’ll skate together.”

Skate together! Is that even possible? I think this as I gaze at her. But I say, “I’ll go get skates right now and I’ll put them on.”

I go off to get skates.

“We haven’t seen you here in a long time,” the attendant says this to me as he supports my foot, screwing on the heel of the skate. “You’re the only guy here who’s halfway decent at skating. Does that feel alright?” he asks, tightening the strap.

“Yeah, sure, just hurry, please.” I can’t hide my rapturous smile which I know has invaded my face. Yes, I think to myself, this is what life and happiness are about! Together, she said; we’ll skate together! But now I’m afraid to talk to her—because I’m happy now, happy in hope, anyway…. But screw it! I have to go talk to her. I’m tired of being weak!”

I rise to my feet, take off my overcoat, and scurrying over the rough ice round the hut, come out on the smooth ice and skate as if my feet were born with blades on them. I increase and slacken my speed and switch course several times in the space of a minute. Then, I approach her, feeling timid. But she smiles and everything is okay.

Kitty gives me her hand, and we set off side by side, going faster and faster. The more we increase our speed, the more tightly she grasps my hand.

“I could learn to skate quickly, with you to lean on,” she says to me. “I have confidence in you.”

“And I have confidence in myself when you are leaning on me.” Oh no. Did I really just say that out loud? Heat rushes to my cheeks, but Kitty’s face is like the sun going behind a cloud; her face loses all its friendliness, and a crease appears on her smooth brow.

“What?” Her voice is nearly as cold as the ice upon which we skate. “Yeah, of

Then her face turns friendly again, but friendly like she has to make an effort to be nice.

“Living in the country must be so dull during the winter,” she states.

“No,. I’m too busy for it to be dull. ” I know she’s holding me in check by her composed tone, and I don’t think I have the force to break through.

“Are you going to stay here in the city for very long?” She asks.

“Because it depends on you.” Immediately, I’m horrified by the words that flew out of my mouth.

Either she hears me, or she doesn’t want to hear me, but she makes a sort of stumble, and speeds away from me, going over to the pavilion where people are taking off their skates.

Good God! What possessed me to say that?! I’m praying for some divine intervention, and at the same time, I feel a need for violent exercise, so I skate in huge loop-d-loops, making sharp angled turns.  I dash down and try a jump, maintaining my balance in this unwonted movement with my hands. On the last step I stumble, and with a violent effort I recover. Laughing, I skate away.