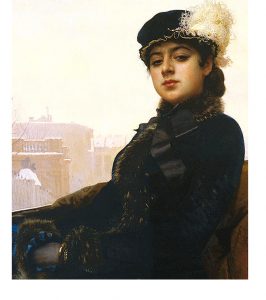 And the story continues, like a slow moving train groaning down the tracks…

We get a peek inside Vronsky’s mind. He had an absentee father and his mother was “a brilliant society woman, who had had during her married life, and still more afterwards, many love affairs notorious in the whole fashionable world.” In other words, Vronsky’s had no model of a stable family life, so we shouldn’t expect too much of him, and neither should Kitty. He’s into her, sure, but no way is he planning to propose. 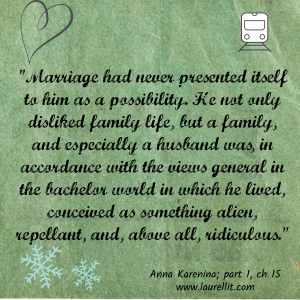 He’s been over at Kitty’s house and hanging out with her makes him feel so pure, and he’s like, “Wow. We have this spiritual bond; I wonder what our next step should be?” Meanwhile, Kitty’s parents are freaking out that he’s never going to propose, and rightfully so!

I think the only point of this chapter is to establish Vronsky as both selfish and oblivious.

They chat. Stiva is like, “Hey, you met my buddy Levin the other day. Isn’t he cool?” And Vronsky evades by saying “Umm…I don’t get why everyone in Moscow, except for you of course, is so defensive and temperamental, like they want to make you feel something.”

(I’m wondering if that’s really a thing in Moscow. It might explain a lot.)

Anyway, Stiva tells Vronsky that Levin is actually a good guy, and that when he met him, he was bummed because Kitty had just shot him down. Vronsky’s response is super diplomatic. He doesn’t care AT ALL that Kitty might get married to someone else.

Then the train arrives.

Turns out she was sitting next to Vronsky’s mom, and they chatted for the entire trip. Mom introduces Anna to Vronsky when they get off the train, and Vronsky likes what he sees.  For what happens next, I have adapted a scene told in first person POV, with a modern tone.

“Tragedy at the Train Station” 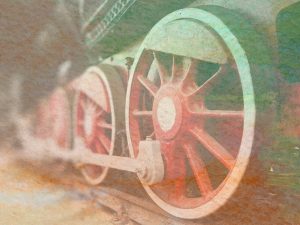 “Let’s go, Mom.” I held my arm out to her, because that’s the kind of chivalrous son I am. (It’s why I’m her favorite.) But just as we were getting out of the carriage several men bolted past us, each looking like the sky might come crashing down if they didn’t get someplace in time. Then the station-master, wearing this awesome multi-colored cap, ran after them. “Mom,” I said, squeezing her hand, “I think something bad just happened.”

A crowd gathered and we could hear their cries. “What?… What?… Where?… Flung himself!… Crushed!…” Stiva and his hot sister Anna turned toward us. They both looked scared, and clearly wanted to avoid the crowd.

“Wait here,” I said to Anna and my Mom. “We’ll go find out what happened. Come on, Stiva.” Then, he and I followed the crowd to find out details of the disaster.

Turns out that a guard had not heard the train moving back, and had been crushed. “Was he drunk?” People in the crowd surmised. “Perhaps his earmuffs were so thick that he just didn’t hear the train moving,” others guessed.

We went back to tell Anna and my mom the details, but they’d already heard it all from the butler.

“Are you okay?” Anna asked her brother.

Stiva did look pale and like he might burst into tears. I wasn’t surprised. Seeing a mutilated corpse can do that to you. But I’m a military man, so I’ve developed a thick skin.

I kept quiet, knowing I look more handsome when I’m serious and composed. Yes, a terrible thing had just happened, but I couldn’t forget that I was in the presence of the most beautiful woman I’d ever seen.

“I’m glad you ladies didn’t see him,” said Stiva. “And his wife was there…. It was so awful!… She flung herself on his body. They say he was the only financial support of his huge family. How awful!”

Did Stiva know any word other than awful? Not to sound insensitive, but all his hand wringing wasn’t doing anyone any good.

“Shouldn’t someone help her?” said Anna in an agitated whisper.

Anna’s face, so anguished and beautiful, compelled me to act.

“I’ll be right back.” And then, I walked back toward the tragic scene.

Vronsky was gone for several minutes, and during that time, his mom and my brother were able to switch gears and recover a bit from the shock. They started talking about some new singer, though Stiva was more into the conversation than the countess was. She kept looking around impatiently, obviously waiting for her son to come back.

“Okay, let’s go.” We were all anxious to leave, so quickly, the four of us went out together. Vronsky was in front with his mother, and Stiva and I walked behind. Just as we were about to leave the station, the station master hurried up to Vronsky.

“You gave my assistant two hundred rubles, but I don’t understand why.”

“They’re for the widow,” said Vronsky, shrugging his shoulders. “I would have thought

“You did that?” cried Stiva, and he pressed my hand. “Very nice, very nice! Isn’t he a great guy?” Stiva does always see the best in people.

Vronsky and his mom got to their carriage, climbed in, and drove away. As Stiva and I walked to his carriage, people walking past us were still in shock, talking about what had happened.

“What a horrible death!” This one guy said, as he passed us. “I heard he was cut in two.”

“Gross,” said a second guy. “But that’s got to be better than a slow and torturous death. At least it happened quick.”

We got to Stiva’s carriage and I climbed in. I could feel my lip quivering, and Stiva must have seen that I was holding back sobs.

“No!” said Stiva. “It was an accident, that’s all. But you’re here, that’s the important thing. If anyone can help save my marriage, it’s you.”

Stiva was trying to change the subject, which he always did when the subject was unpleasant. But I wasn’t ready to talk about him and Dolly.

“Have you known Vronsky long?” I asked.

“Yes. You know we’re hoping he will marry Kitty.”

“Alright, let’s talk about you.” I tossed my head, vainly hoping I could physically shake off this feeling of doom oppressing that was me. “I got your letter, and now here I am.”

And Stiva began to tell his story.