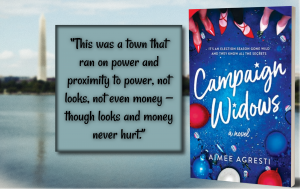 It’s been a while since I read Aimee Agresti’s Campaign Widows, but with my August 25th release of Favorite Daughters rapidly approaching, I’ve decided to focus most of my reviews on political fiction. Campaign Widows is an excellent way to start!

The novel’s protagonist is Cady, who is in a fairly new relationship with Jackson. She uproots her life for him and moves to DC. Everything is great and they’re engaged, and Cady believes she can fit in at the nation’s capital. But then the campaign season begins, and Cady feels alone.

Through her job at Best Day DC, she meets and interviews several people who call themselves “Campaign Widows,” meaning their partner is as good as dead during the campaign season. Cady forms a bond with the campaign widows, as they keep each other company and commiserate about the stress of their lives. Soon, they discover what they must sacrifice for themselves and for each other.

There’s a great cast of characters: newspaper editor Jay, speechwriter turned mommy blogger Reagan, potential first lady Madison, and socialite Birdie compose Cady’s group of influential friends. With their dynamic personalities, they each represent a distinct element of power or prestige within DC politics. The reader gets a great glimpse into the political world of the people who support the candidates, and of the people who support those people.

This novel came out in 2018, which is ages ago when it comes to politics. So much has changed, but then again, a lot has stayed the same. Some people are ruthless, but others have a moral compass. And no matter what, we all struggle with human issues like marriage, motherhood, insecurity, and pride. No matter what, we all need friends. Agresti uses clever writing combined with authentic characterization to create a novel that’s as moving as it is funny.

If you’re looking for a novel that is part escapism, part political reality (with laughs thrown in), then Campaign Widows is for you.