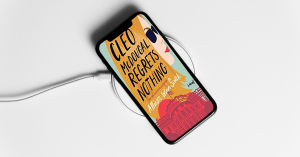 I remember noticing Cleo McDougal Regrets Nothing in Target’s book section, back when it first came out in 2020. Even though I love politics and I love books by Allison Winn Scotch, I deliberately didn’t pick it up, since I was in the middle of trying to publish Favorite Daughters. I’ll admit it: I panicked a bit. An accomplished, skilled writer already had a woman-in-politics book out there. Would there be room for mine? (I had the same reaction when I saw that Curtis Sittenfeld had published Rodham.)

Now, as I prepare for the launch of Favorite Daughters, I’m in a better place, and super-curious about what other female authors have written. Truth is, there aren’t a lot of novels by women that are about women in politics. Hooray for Allison Winn Scotch for creating one.

“This is a story about power: having it, losing it, abusing it, flaunting it, sharing it, craving it, and bequeathing it.” -Allison Winn Scotch, author of Cleo McDougal Regrets Nothing.

I listened to Cleo McDougal Regrets Nothing on audio, with the narration by the fabulous Julia Whelan. (If you have Kindle Unlimited, you can read and listen for free!) Anyway, I find Winn-Scotch’s quote very interesting, because while yes, the book is about power; it is specifically about a female in power, and that’s an important distinction that the novel points out with a subtle strength.

If Cleo’s rise to power is a little unbelievable, that can be forgiven. I wanted to accept that a single mother could become a U.S representative, and then the youngest senator ever, and then a serious presidential contender at 37. When I first started the book, I worried it was another story where, for some reason, the female protagonist is both young and old for her age, because readers don’t like women over forty. That may be the case, but Cleo’s character is layered and driven by the fact that she lost her parents young, and that she became a single mother right as she began law school. If it hadn’t been for those two major life events, Cleo may have taken a different path.

So much of the story is circular, where it slowly moves forward and then circles back, where we get an extended flashback that explains a part of Cleo’s past and the context of a certain dynamic of her present-day. The pieces fall into place, and we understand the how and why of Cleo’s situation, and the choices she’s made.

However, the inciting incident of the story is this: a childhood friend publishes an op-ed in a local paper, stating that Cleo is not a good person. It turns out that Cleo made a few mistakes growing up, but there’s nothing awful, and certainly nothing that a man couldn’t get away with on his way to lunch. But Cleo is a woman, and they’re held to a different standard.

The irony is that while a fellow woman/ex-friend could be the one who brings Cleo down, it’s another woman (sort of a combo between Mary Kay and Oprah) who could be the “queen-maker.” Her endorsement could secure Cleo’s nomination for the presidency.

There is no political indoctrination here, no “I hate men” feminism, but the story has a strong point of view. Cleo is a feminist, and thank God for that. There are some #metoo issues, and Winn Scotch does a great job of highlighting the double standards for women in politics. The novel is also a brilliant character study, and I wasn’t expecting such a focus on personal growth.

I am so happy to have read (listened to) Cleo McDougal Regrets Nothing. Kudos to Winn Scotch for creating a relatable and realistic female politician protagonist. I only wish Cleo was real, and that I could vote for her in 2024!