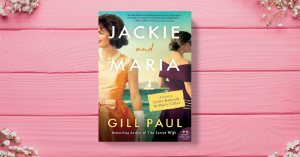 Jackie and Maria was the first novel I read by Gill Paul, but I will certainly come back for more. In fact, The Manhattan Girls (based on Dorothy Parker) comes out on August 16th, and I’m totally there for it. Can’t wait!

But about Jackie and Maria–it’s a historical romance about the two women who were closest to Aristotle Onassis, Jackie Bouvier Kennedy and famed opera singer Maria Callas. This novel had me taking constant breaks to Google facts about the three main characters’ lives, and though other reviewers claim this novel is not super accurate, most of what I found lined up. But it is a novel, and Gill Paul did a fabulous job of creating dialogue and fleshing out the characters of two famously enigmatic women from the 20th century.

Both Jackie Kennedy and Maria Callas experienced tragedy; this novel really drives home the idea that money cannot protect you from heartache. Maria Callas’ failure to have a living baby, and Jackie Kennedy’s ordeal with the assassinations of both JFK and RFK, plus losing three babies, was so poignant. Despite that, this story is full of glamor, with private jets, yachts on the Aegean sea, high fashion, and a world of power and influence. Jackie, Maria, and Ari all come to life, and their private motivations play perfectly against their public personas. Jackie was criticized for marrying Onassis, and they condemned Maria Callas for being a prima donna, but the picture that Gill Paul draws of both women is so three dimensional that it made me want to defend both of them.

The novel underscores how disproportionate the balance of power was between men and women, especially at that time. Onassis pretty much called the shots, and both Jackie and Maria faced criticism, and even hatred from the public, if they made missteps that couldn’t be easily explained.

While it was fiction, the historical aspect is well-researched and fascinating. I am excited to read more novels by Gill Paul!

Buy Jackie and Maria on Amazon