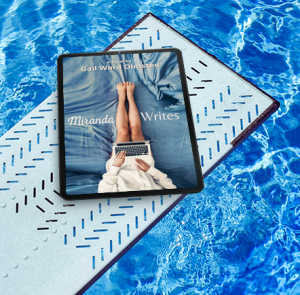 Is it still hot where you live? I live in Minneapolis where temps are rising, and after looking at the national forecast, I know we’re not alone. Unfortunately, post-Labor Day, it’s hard to find a pool to sit by, but if you can, I strongly recommend doing so. And, while you sit and soak up the last rays of summer, I also strongly recommend reading the brand new release by Gail Ward Olmsted, Miranda Writes.

Miranda Quinn knows all about reinvention. Two years ago, she was on the verge of putting sexual predator Terry Kane behind bars. All she needed was testimony from her key witness, Becky. But then, Becky disappeared, and the District Attorney blamed Miranda when he discovered that Miranda was involved with Adam, a lawyer on the defense team for Terry Kane. Miranda insisted that Adam had nothing to do with Becky’s disappearance, but she loses her job, nonetheless.

Shortly after, her relationship with Adam falls apart. She quickly suspects of him duplicity, though she isn’t sure of the specifics. So, they break up, and Miranda moves home with her dad. After consuming a lot of ice cream and even more wine, Miranda picks herself up and starts a “Dear Abby” type of blog that offers legal advice. That leads to a podcast, which in turn leads to her own daytime TV show. Everything is great, until Terry Kane apparently has a new victim. In addition, Becky returns. And she has a story to tell.

Don’t worry; I didn’t just ruin the book for you. What I described is merely the setup for Gail Olmsted’s riveting new novel, Miranda Writes. In Miranda, Olmsted has created a thoroughly likeable and relatable heroine who is smart, savvy, and strong. Yet, she is also wonderfully flawed, warm, and generous. I could totally relate to Miranda’s addiction to carbs (that made me laugh several times) and her conflicting desires to advance her TV career and to do the right thing by helping Becky and putting away Terry Kane. Then there’s the villainous Adam, who has met his match with Miranda. The storyline, supporting characters, and Northeast setting provides a great backdrop that has ample opportunity for subplots, atmosphere, and humor.

In the end, I loved the feminist/girl-power message, and I was impressed with Olmsted’s adeptness at incorporating her legal knowledge into the narrative. The story kept me guessing, laughing, and occasionally gasping. Fans of Janet Evanovich will enjoy this riveting tale of finding your strength and using your power. I hope Miranda Quinn returns for a sequel!