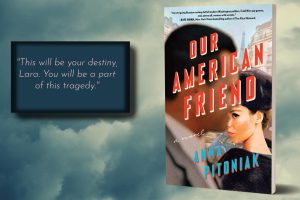 I’ve read reviews that call Anna Pitoniak’s Our American Friend fanfiction for Melania Trump. I disagree. This novel does not fawn over the woman who, when visiting children separated from their parents and put into cages at the southern border, wore a jacket that said I really don’t care, do u? And who, when given a chance to call for peace and unity on January 6th, reportedly said no.

Perhaps, instead, I’d call this novel fantasy fiction, with a focus on fiction. The main character, Lara, definitely resembles Melania Trump, and she is married to a guy much like our former president. But the rest of the story is imagined, and Lara, who first comes off as an apathetic ice queen, turns out to have dark secrets, hidden motivations, deep regrets, and a heroic past. We as readers know that none of it is true, but that’s the fantasy part. But wouldn’t it be great if we found out something about Melania that not only redeemed her, but painted an entirely different picture?

The story goes like this: Sophie, a reporter, quits her magazine job after President Henry Cain is elected to a second term. She drifts for a little while, until an amazing opportunity seemingly falls into her lap. First Lady Lara Cain wants Sophie to write her biography. They begin meeting weekly, and then more often, and Sophie learns the juicy details of Lara’s life. Early on, it’s revealed that Lara, who was born in the Soviet Union but grew up mostly in Paris, has a connection to the KGB, as her father worked for them. But that’s just the beginning. The revelations pile up, each one more shocking than the last. When trust is broken between Lara and Sophie, the story takes an even more unpredictable turn.

Sophie, as a character, could have been more interesting. There wasn’t a lot about her that I found compelling. But Lara’ story and character arc made up for that in spades. And I liked how everything was relayed through Sophie’s voice. Sophie made for a much more effective and interesting narrator than she did as a character in her own right. Overall, the novel has a slow build, but it was expertly done and well-crafted. A NYT blurb calls Our American Friend a cross between Emily in Paris and Scandal, and I think that’s an even more stupid comparison than saying it’s Melania fanfiction. It diminishes the novel as well. Nothing against either of those shows, they’re both fun and entertaining, but Our American Friend is neither a light-hearted romp nor is it a twisty thriller that goes at breakneck speed. This novel takes the time to delve into themes of personal, social, and familial responsibilities and back stories, and it’s as much a character study as it is a story of espionage. It did not leave me breathless. Instead, it gave me a lot to think about, and the novel will stay with me for a while.

This is the third novel I have read by Anna Pitoniak (I also reviewed Necessary People) and she did not disappoint. Her stories are meaty and layered. Don’t read Our American Friend if you’re looking for fluff that is easy to pigeon hole into something predictable. But if you’re looking for a complex novel that will leave you with both questions and answers, give Our American Friend a try.

Buy Our American Friend on Amazon