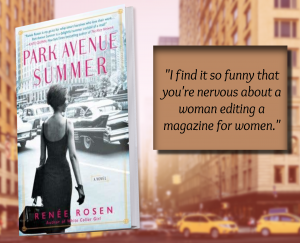 “Cosmo is feminist in that we believe women are just as smart and capable as men are and can achieve anything men can.”

“I was mousy on the outside, but inside, I’m this tiger and I have to get on with it.”

“Don’t worry about vulnerability. You can and will hurt many times, but the hurt can’t really hurt you. Getting behind the hurt, using it to ‘power’ you to your next project can even make you more successful.”

“How could any woman not be a feminist? The girl I’m editing for wants to be known for herself. If that’s not a feminist message, I don’t know what is.”

*Who Was Helen Gurley Brown?

Ms. Gurley Brown believed in the sexual revolution, and was the author of Sex and the Single Girl. When she takes over Cosmo, she has to fight every day to be heard, and to not be railroaded by her male bosses. They want her to conform and keep Cosmo traditional. HGB wants to create a magazine for her “girls”, who are sexual, modern women on the brink of self-discovery.

How is Park Avenue Summer fiction?

The protagonist of Park Avenue Summer isn’t Helen Gurley Brown, it’s Alice. She could be one of HGB’s girls. She has moved from Ohio to NYC, hoping to launch a photography career. But that’s not so easy to do, so a friend of Ali’s late mother hooks her up with Helen Gurley brown and Alice becomes Helen’s personal secretary. The story is told through Alice’s eyes we get an intimate view of publishing and city life in the mid-sixties, right at the dawn of the sexual revolution.

It’s all a ton of fun. There are lots of descriptions of high fashion, NYC hotspots, photo shoots, and 1960s pop culture. There’s also romance and sexual politics. The books is described as a cross between Mad Men and Devil Wears Prada, and that’s a perfect comparison.

One thing is made clear: Helen Gurley Brown cared for and wanted to mentor “her girls.” There is some debate about the meaning of “feminism” and whether HGB qualifies as a feminist. Most of this is filtered through Alice’s thoughts.  Alice is a great character and it’s easy to root for her her as she tackles her through her first real job, her various romances, and coming to terms with her family history.

Bottom Line
It’s a superb blend of fact and fiction. Rosen’s knack for description establishes a vivid sense of time and place. I felt elegant and sophisticated, just reading the novel!