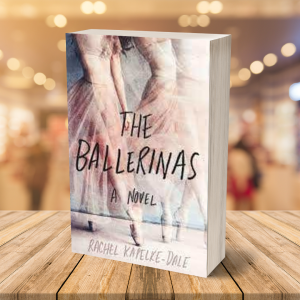 I became aware of The Ballerinas, by Rachel Kapelke Dale, in an airport bookstore, when I had six hours to kill due to a delayed flight. I was immediately intrigued by its cover, with three female forms donned in pretty pink tutus. That’s because I have spent a lot of time in my life, from when I was around five years old and all the way through college, taking ballet lessons. I was never very good, but I stuck with it and eventually earned the opportunity to wear pointe shoes and catch a glimpse of a ballerina’s world. So, I put the book on my mental TBR list and downloaded the audio version the next day, after I’d returned home.

The story is not what I expected, but honestly, I wasn’t sure of what to expect. However, I can tell you what I didn’t expect, which was an entirely feminist piece that wasn’t just about female friendship, but also how women are forced to conform to men’s expectations, while at the same time, they must “depend on their goodwill,” since men are bigger and more physically powerful than women. I didn’t expect a story about three women who spend their lives shaping themselves into a delicate, feminine ideal, but who then espouse a philosophy that, in my mind, is not spoken of enough nowadays.

I loved the book.

Part of my reason for that is it’s incredibly entertaining, with compelling (if not likable) characters, and it paints a vivid picture of the ballet world both in Paris and in St. Petersburg. The book begins with Delphine, the main character and narrator, returning to Paris after spending thirteen years in St. Petersburg. She has left behind her now ex-boyfriend, a Russian choreographer who is both older than her and a chronic philanderer. Delphine used to be a ballerina at the prestigious Paris Opera Ballet, where her two best friends, Lindsay and Margaux, still dance. While she is excited to return and re-establish old ties, there are terrible secrets, rivalries, and grudges that threaten to upend any chance of happiness or connection for the three women.

The novel uses flashbacks, starting with Lindsay’s arrival as a student to the Paris Opera Ballet and moving through the years as the friends vie for limited spots as soloists. The narrative switches back and forth between the past and present, and the suspense and tension builds to a shocking twist that in hindsight, seems inevitable. Delphine, who has become what’s known as a rare “feminist choreographer” must forge a path and help her friends, while creating what feels impossible, a feminist ballet. She observes, “Ballet doesn’t tend to produce activists; we’re trained too much, too early, in this art form that is the pinnacle of traditional femininity. If you’re any good at it, that means you’ve already bought into the system.”

The Ballerinas may move a little too slow for some readers, because it is both thoughtful and profound. However, that’s why I enjoyed it, because Rachel Kepelke Dale’s writing is smart and lyrical, she also managed not to sacrifice the building of suspense and intrigue. If the characters were an acquired taste, I was fully rooting for Delphine, Lindsay, and Margaux by the end. I strongly recommend The Ballerinas!

Buy The Ballerinas on Amazon