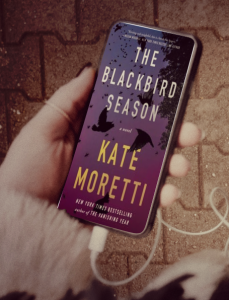 Kate Moretti’s novel, The Blackbird Season, is entirely original and full of symbolism mixed with suspense. It takes place in an industrial Pennsylvania town that pretty much revolves around high school sports. On the opening day of the baseball season, suddenly and mysteriously, hundreds of starlings drop from the sky. The press and scientists flock to the town, trying to figure out why. But that’s just the beginning of the dark, mysterious events in Mt. Roanoke. Lucia, an outcast accused of being a witch, accuses popular (and married) high school teacher/coach Nate Winters of sleeping with her.  Then, she vanishes. Everyone assumes Nate is guilty, except for his co-worker/Creative Writing teacher, Bridget.

The chapters alternate in POV between Nate, Bridget, Lucia, and Nate’s wife, Alecia. What unfolds is a mysterious psychological drama that is also a slice-of-life in a struggling Pennsylvania town.

Time weaves in and out, and the shifting POVs makes the reader wonder which, if any, of the narrators are reliable. The characters are three-dimensional, each with their own agenda and issues to figure out. This makes both the story and the mystery character driven, which I really liked. The mystery of the falling blackbirds sort of recedes behind the human drama, but it represents what the town itself is going through, like unemployment, young people moving away, problems with addiction, and the damage to the environment. I saw the birds as an allegory, and the rest of the story was a compelling drama that was easy to connect with.

I listened to The Blackbird Season on audio and all the narration was well done. This novel is sort of a slow burn, but if you take the time to get into it, it’s totally worth it!