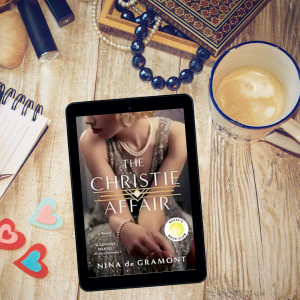 “Ah Reader. Must I know and provide an answer for everything?”

On December 3, 1926 Agatha Christie went missing for 11 days. This was after her husband, Archibald Christie, told Agatha that he was leaving her for a younger woman. Then she took off, leaving Archie and their young daughter, Teddy, without an explanation. Agatha resurfaced of course, and she went on to write many novels and eventually remarry. But why did she disappear, and what did she do during that time? It remains a mystery, as Agatha Christie never spoke much about those 11 days. But there are multiple theories, like she wanted revenge, or it was a publicity stunt, or she had amnesia, or she just couldn’t deal.

Author Nina de Gramont provides an elaborate scenario for what might have happened. Yet, the novel’s brilliance stems from its point of view. The entire story is told by Nan O’Dea, who was based on Nancy Neele, Archie’s mistress and eventual second wife. Rather than being villainous, Nan has her own tragic backstory, and the reader comes to understand her motivation for stealing Archie away. It has to do with WWI, Irish Catholicism, and the unfairness of the world. Young men must fight in wars. Young women, especially poor young women, are valued only for their child-bearing bodies, and are dehumanized. How can love survive?

Nan is a fairly omniscient narrator, assuming facts about Agatha and her whereabouts that she never could have known. But this is easy to accept, as Nan admits she uses clues and deductive reasoning to guess what happened. And she is brutally honest about her own story, which blends with Agatha’s into something poignant and moving. There’s also, in true Agatha Christie fashion, a whodunit mystery woven in. I should have seen the answer coming, but I was shocked and surprised by it all.

As for both Agatha and Nan’s stories, the reader knows the inevitable conclusion from the beginning, yet clings to the mystery and the romance nonetheless. The Christie Affair is both surprising and beautifully written. I highly recommend it!