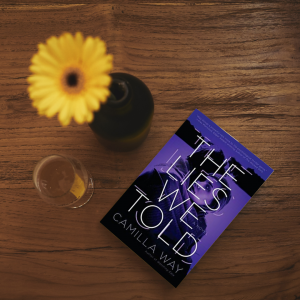 The Lies We Told is the first novel I’ve read by Camilla Way. Now that I know about her, I will be looking up her other three novels. Because, The Lies We Told is a twisty, suspenseful novel that’s full of surprises throughout, and with a huge surprise at the end that I never saw coming. There are also smaller surprises that come one after another, all building up a story that I couldn’t put down.

There are two point of view characters. One, told in first person point of view, is the voice of “Hannah’s mom.” She describes how she raised her daughter, who turned out to be a sociopath. The other main character is Clara, and her chapters are told in third person limited POV, where we hear from an outside narrator about Clara’s thoughts and actions. At the beginning of the novel, Clara’s boyfriend Luke is missing. After contacting all his friends and family, Clara’s vain hope that Luke merely went on a bender and didn’t tell her are dashed. She gets the police involved, and then she slowly learns not just secrets about Luke’s past, but about his family as well.

The reader is left to wonder, what is the connection between Hannah’s mother (who also has an unrevealed, terrible secret of her own), and Luke and Clara? The chapters about Hannah’s mom take place over twenty years ago, so we can only guess how everything is connected. However, I am happy to report that there is a viable, believable, and shocking explanation for how all the storylines fit together.

Does it Deserve Five Stars?

Yes! Even after the climax of the story, the surprises and the connections keep coming. Camilla Way’s writing was skilled and entertaining. She managed to create this crazy, unpredictable plot that totally worked, and without any plot holes. Her characters and settings were also well drawn. I’m so happy to have discovered this author who is clearly a major talent.

I recommend that you read The Lies We Told right away!