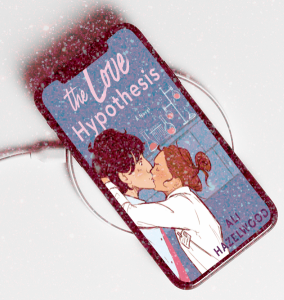 Today is day two of my own personal challenge to write 10 book reviews in 10 days. There are so many books I loved that I never blogged about, and over the next week and a half, I’m going to begin to remedy that.

Today’s book is The Love Hypothesis by Ali Hazelwood. This is another book where I listened to the audio version. (I go for a lot of walks & runs, and I always listen to audio books when I do.) It was completely diverting and a tremendous amount of fun. I started it last November, during NaNoWriMo, when I’d decided to try my own hand at writing romance. Since it’s important to read the genre you’re attempting to write, I chose The Love Hypothesis for its university setting and self-professed geekiness. Also, there was a tremendous amount of buzz and hype around the novel.

The hype was well-deserved. The story is about Olive, a third-year Ph.D. student in biology. Olive lost her mother young, and she’s at Stanford to research a cure to pancreatic cancer. She’s resisted close, personal relationships because she loses everyone she loves. One of the only exceptions is her good friend, Anh, who becomes interested in a guy Olive had been casually dating. Olive knows Anh will never go out with him unless she’s convinced Olive has moved onto someone new, so she impulsively kisses a hot scientist professor named Adam.

Then, much hilarity and science-talk ensues. Adam is dreamy and wonderful, but he’s a diamond in the rough. Olive is completely oblivious to how he feels about her, and their signals get crossed multiple times. The story itself is perfectly paced and while it follows some typical romantic tropes, it’s done in a way that’s inventive and original. I believed the characterizations, was invested in the relationships, and loved all the university politics sub-plots.

What really struck me, however, was how Ali Hazelwood wrote with a mix of head and heart. She has all sorts of science references that mostly went over my head, but which I enjoyed nonetheless. Yet, she also lays out raw emotion, and that was the real center of the story. She didn’t shy away from making her characters vulnerable and setting them up for humiliation and hurt. So, it was that much more rewarding when they found love.

I loved The Love Hypothesis and can’t wait to read more by Ali Hazelwood!