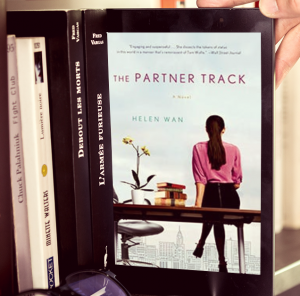 The Partner Track, by Helen Wan, was released back in 2013. Unfortunately, it reads like it was written today; I doubt Asian-Americans have experienced much improvement when it comes to workplace discrimination. The good news is, a Netflix series based on the novel is currently in production. I am eagerly waiting for the premiere. The novel was great, and I expect the TV version will be as well.

The story is about Ingrid Yung, an Asian American woman striving to become the first woman of color to make partner at her Manhattan law firm. Ingrid faces micro-aggressions every day, but she plays the game and stays focused on her goal. She realizes there’s a double standard, that the expectations for her are far greater than for the white, male associates. Slowly, the female associates who began with her at her firm, Parsons Valentine, leave to start a family or pursue other careers. Other women, like the legal secretaries and the paralegals, dismiss Ingrid as unimportant, even as they get ogled by her co-workers. Against her better judgment, Ingrid becomes romantically involved with Murph, the golden-boy associate who is also up for partner. Then, things get complicated. After a racially charged incident at a company event, Ingrid is forced to be on a “diversity committee”. Suddenly, her potential partnership is threatened, and a major deal she was about to close is in jeopardy. Ingrid starts to see all the slights against her with new eyes, and she must ask herself some tough questions. Is achieving her dream worth the price of conforming?

I loved the close look inside a Manhattan law firm, which is a world completely unfamiliar to me. Yet, the best part of the novel was its perspective. Seeing the world through Ingrid’s eyes was enlightening. Her backstory, growing up as the child of immigrants, was vividly told. Ingrid’s choices may not always make sense on the surface, but once the reader understands her context, everything falls into place. As a woman, I could identify with much of what Ingrid went through. But, as a white woman, there was a lot for me to process. Helen Wan does an excellent job of creating a character who’s flawed yet inspirational, and vulnerable yet strong. Seeing Ingrid struggle, ruminate, and ultimately prevail, made for a reading journey well-worth my time.

I highly recommend reading The Partner Track, and soon! You’ll want to read it before the Netflix series premieres.