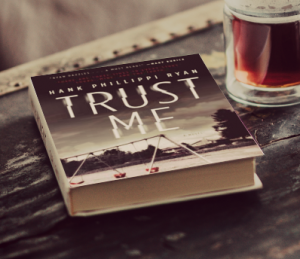 About a year ago, I took part in a virtual seminar in thriller writing that was led by Hank Phillippi Ryan. Even though  I was experiencing  side-effects from my second Covid shot, I got a huge amount out of the workshop and was very impressed with Phillippi Ryan’s expertise and ability. I immediately looked up her novels. (I confess, I hadn’t been familiar with her work before that point.) I chose to read Trust Me, which apparently was her first stand-alone novel. She’s released several others since Trust Me, and Her Perfect Life is especially high on my TBR list.

Trust Me is the opposite of formulaic. I was surprised, because her workshop focused on thriller-writing conventions. But following conventions doesn’t mean you have to be unoriginal, or that you can’t break the rules. The story is about a woman named Mercer, who has been a recluse for over a year, ever since her husband Dex, and their young daughter Sophie, died in a car accident. Mercer is a journalist, and she gets a call from her editor/good friend Katherine, who wants Mercer to write about the upcoming trial of Ashlyn Bryant. Ashlyn is on trial for the murder of her daughter, Tasha Nicole. Katherine wants Mercer to write a book about Ashlyn and Mercer reluctantly agrees.

At first, this seems completely crazy. Why would a woman who is deeply mourning her young daughter’s death, agree to write about a woman who seems guilty of killing her own daughter? But Mercer decides the best way to honor Sophie is to avenge Tasha Nicole’s death. She accepts the job so she can prove Ashlyn is guilty.

That’s when the lines become blurred. Mercer is a journalist, but she plays fast and loose with the truth, concocting scenarios that she believes are real. Then, she begins to work with Ashlyn herself, and the truth becomes even more hazy. Is Ashlyn a master manipulator, or is Mercer really starting to lose her grasp on reality? Could both be true at once?

There are parallels to the Casey Anthony trial, but the book is a lot more than that. Phillippi Ryan brings the reader inside Mercer’s head, so that we deduce at the same time, we question at the same time, and we subject ourselves to manipulation at the same time as Mercer does. It’s really quite brilliant, and I found myself constantly questioning what was real. At the same time, there’s another layer. I spent the entire novel wondering whether Ashlyn was a villain, but at times, I also questioned whether Mercer might be one as well. Her journalistic integrity is called into question. In addition, it becomes clear she is an unreliable narrator in her memory of Sophie and Dex’s death. Then, the people in her orbit also become questionable, and the reader is left wondering if anyone or anything is as it seems.

I will forever sign up for any workshop taught by Hank Phillippi Ryan, and I am excited to read more books by her. Trust Me is a skilled, unpredictable novel that draws you in and never stops with surprises.

Buy Trust Me on Amazon