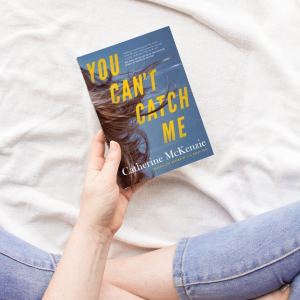 When the book begins, Jessica has just lost her job in disgrace. She’s about to take her severance package and leave town for somewhere tropical, when she meets another Jessica Williams with the same birthday as her at the airport bar. They have a conversation, Jessica #1 shares way too much, and several days later, she realizes that her identity has been stolen by Jessica #2.

After that, Jessica travels around, trying to find other Jessica Williams who were born on the same day. She enlists two of them to help her find the identity thief, eventually winding up on the craziest camping trip ever. Interspersed throughout, are flashbacks to Jessica #1’s childhood in a cult, and then we see the lasting effects which she now suffers. Also, some romance is sprinkled in, adding to the already suspenseful tale.

I can only marvel at how McKenzie plotted out this novel, but I wish I could come up with storylines like this. I also love how her characters are always flawed but relatable. You Can’t Catch Me is well worth your time!