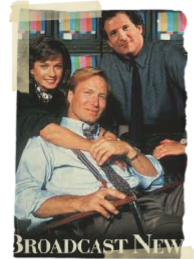 Broadcast News has always been one of my top ten favorite films, ever since I saw it in the theater as a teenager. When I was young, I enjoyed it for its witty banter and the depiction of its feminist yet feminine protagonist, Holly Hunter’s Jane. At one point, Jane’s boss says to her sarcastically, “It must be nice to always believe you know better, to always think you’re the smartest person in the room.” Holly Hunter/Jane responds, deadpan, “No. It’s awful.”

The movie is more than just a love triangle comedy. It is also a commentary on the state of the news industry in the late 1980s, shortly before CNN and the 24 hour news cycle began. It serves as a cautionary tale of what might happen when network news is valued more as entertainment than it is for relevance.

But here’s the thing: while we now know that a lot of the film’s prophecies have been fulfilled in the years since it came out, it falls down in one major way.

The story goes like this: Jane, a news producer, meets Tom, a good looking and charming local anchor, at a professional conference. He is super interested in talking to her about the integrity of the broadcast news profession, but she mistakes that for him being interested in her, and when she tries to seduce him, he shoots her down. But then – damn – he tells her that he’s just been hired by her network news division and that they’re going to be coworkers.

Jane confides all of this to Aaron, her best buddy/work husband. Aaron is a reporter who gets sent around to different locations; he is mistreated and undervalued for his brilliance. He is also in love with Jane, but she doesn’t return his romantic feelings.

When Tom shows up to begin work, there is immediate tension between the three of them. For his part, Tom tries to prove he is more than just a good speaker and a pretty face. Meanwhile, Aaron feels threatened, knowing that the network values flash over substance.

The movie can be boiled down to this concept. Tom represents flash, Aaron represents substance, and Jane must choose between them.

But this is where we run into a problem in how the film doesn’t age well. Tom decides to do his own story about date rape.  Date rape wasn’t talked about much back in 1987, and when he brings up the idea to Jane, she cringes. But she helps him produce his story, which includes a tearful Tom responding to the woman he interviewed as she told her story about being raped.

There’s a scene where everyone in the office is watching it, and Aaron comes in. Jealous of the positive attention Tom is receiving, he bursts out, “Can we turn on the news?”

When Tom asks him, “What’s wrong with it?” Aaron responds, “Nothing. You really blew the lid off nookie.”

Nowadays, we take the issue of date rape a lot more seriously, and there is NO WAY a sympathetic character would respond that way. We’re supposed to like Aaron, but he comes off as dismissive and insensitive when it comes to rape, as he implies that such an issue is not newsworthy.

Combine that with his unwanted advances toward Jane, and Aaron would for sure be cancelled in the #MeToo era.

That said, it’s still a great movie and I enjoyed watching it just as much as I did decades before. I still love Albert Brooks in the role, especially his “Tom’s the devil” speech to Jane.

The film did a good job of presenting three complex characters who are each both flawed yet sympathetic. It also gave a good snapshot of network news, right before CNN began to exist. If a similar film was made today, it would look a lot different, but as it is, Broadcast News is both nostalgic and strangely relevant, even when watching it through a modern-day lens.