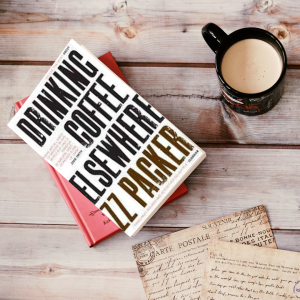 In “Brownies,” from Drinking Coffee Elsewhere, ZZ Packer relays a tale that is based on either a lie or a misconception, depending upon how you want to look at it. The members of an all Black Brownie troop insist they heard a member from an all White Brownie troop use the “N” word. The story is told through first person POV, by a girl nicknamed Snot. She barely speaks, but she focuses quite a bit on how other people sound.

In the beginning, Snot is not so relevant as a character. She narrates without defining herself. Eventually, we learn that she’s bullied. “I had been called ‘Snot’ ever since first grade, when I’d sneezed in class and two long rows of mucus had splattered a nearby girl.” She is so quiet and passive, that when she does finally speak, trying to affect what might happen with the white-girl Brownie troop, she remarks, “All the rest of the girls looked at me, for I usually kept quiet. If I even spoke a word, I could count on someone calling me Snot.”

Of Daphne, another girl who is quiet and whom Snot feels connected to, she says, “her voice was petite and tinkly, the voice one might expect from a shiny new earring.” Of Arnetta, one of the self-appointed leaders, she says, “Her tone had an upholstered confidence that was somehow both regal and vulgar at once. It demanded a few moments of silence in its wake, like the ringing of a church bell or the playing of taps.” And when Snot first comes to realize the truth about the competing Brownie troop, it’s because “The girl sounded as though her tongue were caught in her mouth.”

Finally, at the very end of the story, Snot starts to relay something that happened when she was at the mall, only to be cut off. Then we learn her real name, and she’s given license to speak when Daphne says, “Go on, Laurel.”

She tells how her father asked Mennonites to paint his porch, simply because he knew they wouldn’t say no. Just as her father had been subjected to mistreatment, he would do the same when given the opportunity. Laurel/Snot makes the same connection with her Brownie troop. They’d come to two realizations: one, that they were seen as “less than” because they were made to attend camp with a group of special needs girls; and two, that they’d inadvertently targeted a group who was more disadvantaged than they were. Laurel/Snot realizes that “there was something mean in the world that I could not stop.”

It seems to me that “Brownies”, while told in first person from a child’s point of view, is similar to To Kill a Mockingbird, in that at times, the narrator speaks with the wisdom of an adult. The fact that the story takes place in the early 80s is another sign that Laurel/Snot is looking at the events through the lens of an adult.

Write a story from the first person point of view of a child, and write it in past-tense. However, give your narrator the perspective of someone who is at least ten years older, and the wisdom that affords.

Write a story that is based off a mistake. Someone thinks they heard something, but they heard wrong. Try to continually raise the stakes, until the situation caused by this misconception gets out of control.