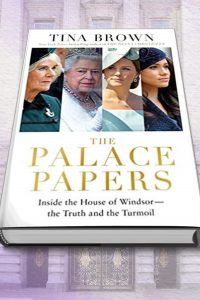 How I came to read The Palace Papers

I never paid much attention to the Royal Family until I started watching The Crown on Netflix. Then, I became a little bit obsessed with what was real and what was embellished for drama’s sake, and I found myself doing Google searches on Princess Margaret, Prince Charles, Diana, Prince Phillip, Margaret Thatcher, and of course, Queen Elizabeth. In the process, I brushed up on my 20th Century British history.

Still, when Oprah interviewed Harry and Megan, I didn’t watch. (I did read about the interview afterwards though). I never had much of an opinion on if Harry and Megan were justified in leaving their royal posts, nor did I know if I was on their side or if I was team William and Kate.

And yet, every time a new Vanity Fair arrived in the mail, if it had an article about the royal family, I’d read it right away. And I’ve confessed to feeling bad for Charles (especially after seeing some of the Charles-centric episodes on The Crown.)

Fast forward to last May. My husband and I thought we were flying to New Orleans for a few days, but our flight was cancelled, so we made the impulsive decision to fly to Las Vegas instead. Faced with the prospect of hours by the hotel pool, I made another impulsive decision, and bought The Palace Papers by Tina Brown at the airport bookstore.

Wow, is it dense!

I got roughly a fourth of the way through the book on our vacation, and then read more when I got back. The first part has a lot about Charles and Camilla, and Camilla comes off very well, except for the description of a car accident that she caused. Diana’s personality and choices are examined, and I’d had no idea the level of disfunction that she’d had to deal with, growing up. While she was certainly the beloved as “the people’s princess”, she also put too much responsibility on William when he was still a kid, and I could understand Elizabeth’s frustrations with her. And yet, Diana maintains her image as both a sympathetic and tragic figure, because despite some misguided choices, she always had benevolence as a core motivator in everything she did.

Anyway, I decided to take a break from reading after I finished part one. Then, a few weeks ago, there’s breaking news.

A CNN reporter, in a choked up voice says, “Queen Elizabeth has died. Charles is now king. Long live the King.”

There was something so touching about that, how a centuries-old tradition maintains itself even in heightened emotional moments. And of course there was all the talk about how impactful Elizabeth was, how she dedicated her life to duty. That made me return to reading The Palace Papers.

I confess: I skipped to last the part about Harry and Megan. (That means I didn’t read most of the Prince Andrew parts, though I did read about him in Vanity Fair, and it’s all so sickening. He should have lost his military posts, title, and much more, much sooner.)

I knew that Megan was an actress, but I was unaware that Megan used to run a Gwyneth Paltrow type blog called The Tig, named after her favorite wine. The more I read about Megan, the more she seemed overly focused on cultivating an image and on advancing herself.  Author Tina Brown never states it out front, but she seems to imply that Megan is a narcissist.

None of the royals were without flaws, not even Elizabeth. But what I got from all this is that Elizabeth always put duty before everything else, including herself. She was the opposite of a narcissist.

Prince Phillip summed it up perfectly when he described their Australian tour so long ago: “More than a million people came out and cheered the Queen, a million! It wasn’t about her. They came because she was the Queen. If you start thinking it’s about you, you’re lost.”

Brown contrasts that ideology with Harry and Megan’s attitude during their own Australian tour, when she believed that “Megmania” meant that Sussex should be elevated in Palace hierarchy. Harry thought the Royals were jealous of Megan’s popularity, just like they’d been jealous of Diana’s popularity after her tour of Australia. But Brown points out that after her tour, Diana stated, “I realized the sense of duty, the level of intensity and interest, and the demanding role I now found myself in.” Conversely, Brown points out, Megan appeared to draw a different conclusion from her first tour: that the monarchy likely needed her more than she needed them.

But with recent events, including the Queen’s death, it seems clear to me that was not the case. The intense coverage after the Queen’s passing all seemed to agree on at least one point: Elizabeth II devoted her life to duty. It occurred to me that when asking yourself which British monarchs are best remembered for successful and prosperous reigns, the three most likely responses are Queen Elizabeth I, Queen Victoria, and Queen Elizabeth II. All women.

Perhaps female monarchs are more suited to put duty first, and to not serve their own selfish interests?

I know from watching The Crown that Elizabeth had the reputation for being cold at times. And yet, the flipside to that may be her most remarkable quality. Brown states, In an age when everyone has opinions, she has maintained the discipline of never revealing hers. Her epic stoicism has come to signify the endurance of a nation.

Now that Elizabeth has passed, many wonder if the British Royal Family should be abolished. The Palace Papers does not answer that question. Rather, it leads the reader into pondering the matter for themselves.

Anyway, I’m glad I read (most of) The Palace Papers. I recommend it if you’re into The Crown or royal gossip.