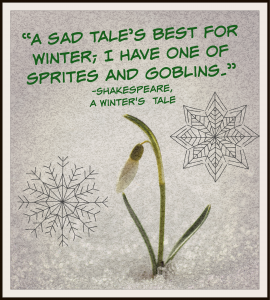 Why study The Winter’s Tale?

This play offers a lot for discussion. I wouldn’t read the entire play with your students, but rather, discuss the story, the themes, and certain notable lines instead.

Leontes, king of Sicilia, wants his childhood buddy, Polixenes, to stick around for a while, rather than return to New Bohemia, where he is king. But Polixenes has been away for nine months, so he says that he needs to get back to his kingdom. Leontes asks his wife Hermione, who is close to giving birth, to convince Polixenes to extend his stay for another week. She convinces Polixenes to stay. However, Leontes is suddenly seized by extreme jealousy, convinced that Hermione and Polixenes are sleeping together, and that Polixenes is the father of Hermione’s soon-to-be born baby.

Nobody can convince Leontes that Hermione is innocent.

Leontes banishes Polixenes, and sends Hermione to jail. She delivers a baby girl; Leontes sends the baby away to be abandoned in the woods, and asks an oracle to tell him the truth of what has gone on; the oracle says that Hermione was faithful to Leontes. But it’s too late: Mamillius, Leontes’ pre-teen son, dies of grief and trauma; then Hermione dies from shock and grief as well.

Antigonus, the man who has to abandon the baby in the woods, travels to New Bohemia. While looking for a good spot to leave the baby, he gets eaten by a bear.

Fast-forward sixteen years: Leontes & Hermione’s baby, now teenaged girl Perdita, has been raised by a shepherd. She meets and falls in love with Prince Florizel, the son of Polixenes. They want to get married, but Polixenes doesn’t want his son marrying a commoner.

They escape back to Sicilia, where Leontes has been regretting his actions for the last sixteen years. He meets Perdita and realizes she’s his daughter. Polixenes follows his son to Sicilia, and when everyone realizes who is whom, they rejoice. To top it all off, it turns out Hermione has been preserved as a statue, and when she is faced with her living daughter, she comes back to life as well.

How do you classify this play?

The tone of The Winter’s Tale is definitely unusual and can give a sense of whiplash. There is so much doesn’t make sense. It begins as a tragedy, but shifts to a comedy, right around when Antigonus gets chased off the stage by a bear. In fact, if the play is famous for anything, it’s the stage direction, “Exit, pursued by a bear.” 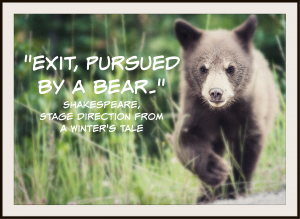 If your students are already familiar with Shakespeare’s conventions, I suggest discussing how the play shifts and defies genre. What works and what doesn’t work about the play. Most importantly, how is personification used to reinforce themes of human failings, and forgiveness?

Personification in A Winter’s Tale

There are multiple instances throughout the play when concepts like fate, forgiveness, time, etc., are personified. Fate is referred to as an enemy by Florizel. Time is personified at the beginning of Act Four. And throughout, emotions and/ or states of being are given human qualities.

Leontes: “Is this nothing? Why then the world and all that’s in’t is nothing: The covering sky is nothing, Bohemia nothing, My wife is nothing, nor nothing have these nothings, If this be nothing.” (Shakespeare 1.2.293-296)

Antigonus: “Come on, poor babe. Some powerful spirit instruct the kites and raven to be thy nurses!” (Shakespeare 2.3.218-22)

Of course, this sort of personification is pretty standard Shakespeare, and many more examples could be found not just in The Winter’s Tale, but throughout his canon of work. But since The Winter’s Tale doesn’t quite make it as a comedy or as a tragedy, I would zero in on the concept that forces beyond our human understanding can control us. Perhaps we can label these forces, and identify them as things like jealousy, faith, and the passage of time, but that doesn’t mean we have power over them. It’s the opposite, and I think bringing out that theme in The Winter’s Tale could almost be some sort of allegory about how easily humans can succumb to their worst instincts, and how hard they must work to find redemption.