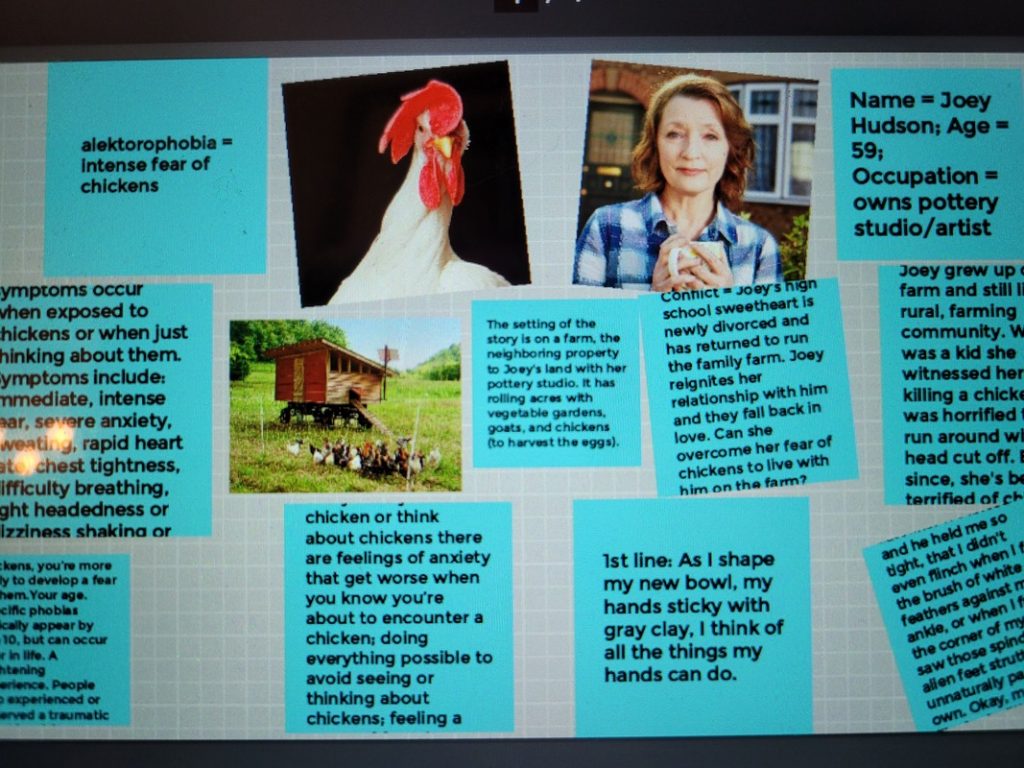 I did this Jamboard as an example for my students, for a Creative Writing assignment. I have been working on creating new assignments that will engage them via distance learning. This one is done in steps. The first step is to chose a phobia and do some research. As my example, I chose alektorophobia, which is an intense fear of chickens. The second step is to create a jam board, with post-its about the phobia, and ideas for a protagonist who suffers from it, along with their ideas for setting, conflict, the first line, and the last line. The last step is to write the story, which will my students will be doing on Monday. I sat down today to write my story, and realized it is going to be a bigger project than I’d thought, because I like this character and what I’ve done with her so far, so I want to take my time and develop it to its highest potential. But here’s a passage I particularly like:

I knew that Max had left by then, abandoning his plans to take over his father’s farm after he’d been offered a track scholarship. Last I’d heard, he was married, living in Florida, and ran a tour boat business. I still thought of him often, regretting how I’d handled things. I suppose if you wanted to get all deep, that headless chicken running at me was like a metaphor for my choices and fears, the weight of my decision to marry the boy next door and to commit to the farming life, to never want anything more, to accept the darkness that lingered underneath a life spent raising animals only to harvest their eggs or to kill them. I suppose if you wanted to get really, really deep, that headless chicken running at me was a sign that I should be the one running, without looking back.

As excited as I am to see where I can take this story, I am also excited to read what my students come up with. So far, there’s one with a fear of sunflowers after eye-surgery gone wrong, one about a carnie show suffers from fear-of-being-seen, and a story about Jennifer Aniston and her supposed fear of water, though she owns a swimming pool. I will update this and let you all know how the stories turned out!