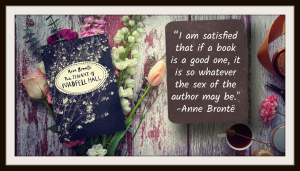 “…how cruelly he has trampled on my love, betrayed my trust, scorned my prayers and tears, and efforts for his preservation, crushed my hopes, destroyed my youth’s best feelings, and doomed me to a life of hopeless misery, as far as man can do it, it is not enough to say that I no longer love my husband – I HATE him!”

I am a huge Brontë fan. While Charlotte, Emily, and Anne often get lumped together, they had fairly distinct voices.  Anne especially has been overlooked or overshadowed by her more famous sisters.

Author of The Tenant of Wildfell Hall, Anne Brontë was the youngest Brontë sister. She lived a sheltered life, and was extremely attached to her closest in age sibling, Emily. Together, they created an imaginary world of Gondal, and wrote poetry connected to it.

(To read more about her and Emily’s Gondal poetry, click here.)

She only once ventured outside her family home for any length of time. She worked as a governess, but that didn’t last, because her brother, Branwell, worked at the same household as tutor. When he became romantically involved with the lady of the house, he was sent packing, and so Anne left too.

When she returned home, she focused on writing. It was Charlotte’s idea to publish their poetry, and after funding their own book, they then moved on to writing novels. Anne died at 29, only months after her siblings Branwell and Emily succumbed to tuberculosis. Out of her, Emily, and Charlotte, she was the least well known. In a way, that’s surprising, given that her second novel, The Tenant of Wildfell Hall, was shocking when it first came out. In fact, some regard it as the first feminist novel.

The reason for that? The story revolves around a woman who not only comes to hate her husband, but who leaves him as well. 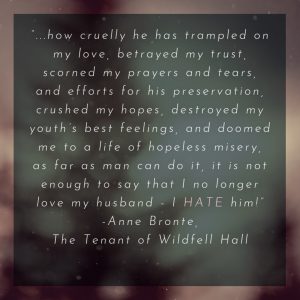 The story begins as an epistolary, where a farmer named Gilbert writes letters to his best friend about Helen, a mysterious young widow who has moved into the nearby Wildfell Hall with her son, Arthur. The town’s busybodies criticize Helen for doting over Arthur too much, and they gossip about her too. But Gilbert befriends her and quickly falls for her.

In part two, after Gilbert beats up Helen’s brother (who he thought was a suitor for Helen), she gives him her diary. The narrative shifts to Helen’s diary entries, where she describes her courtship and marriage to Huntingdon. He starts off charming if not manipulative, but then he abandons her for months at a time and parties too hard with his delinquent friends. When their son is born, Huntingdon gets jealous of all the attention Helen gives him, and he begins an affair with a woman he was courting at the same time he’d courted Helen. Helen finds out about the affair, tells Huntingdon she wants to leave him, but he won’t have it. So she must endure his abuse, which is both emotional and physical. When he starts to corrupt Arthur, Helen finally decides to leave in the middle of the night and sneak away with their son. 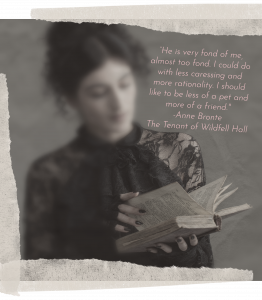 Anne Bronte was never married, but her depiction of an abusive relationship is as good as any I’ve read, (luckily) not having first hand knowledge of being in one myself. If you take a look at her family history, it doesn’t take a genius to figure out that she modeled Huntingdon off her brother Bramwell, who was an alcoholic, opium addict, a failed poet, and who died by setting his own bed on fire.

That is apparently the reason why Anne’s big sister wanted to keep The Tenant of Wildfell Hall quiet. She didn’t want to air her family’s dirty laundry, so to speak. Also, while all three Brontë’s wrote under male pen names, at one point the rumors were that Charlotte, or the author of Jane Eyre, also wrote The Tenant of Wildfell Hall, and that infuriated her. Sadly, when Anne died not long after her novel’s release, Charlotte limited any further editions. 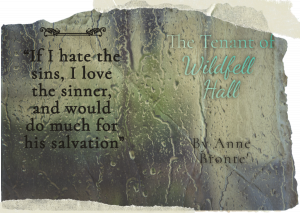 Truthfully, I find Jane Eyre and Wuthering Heights more entertaining than The Tenant of Wildfell Hall, mostly because Helen is so pious, it’s not as easy to connect with her as with passionate Jane or Catherine. But I was intrigued by having Huntingdon, who could be equated to Mr. Rochester or Heathcliff, actually being a bad boy who turns out to be beyond redemption. And of course, I liked the feminist message. Anne Bronte’s memory deserves more recognition. It’s amazing to me that she had the courage to write such a controversial piece, and that she was so young and alone when she did.

If you like elements of gothic romance, please check out my novel, Just Like the Brontë Sisters. It is on sale today and tomorrow (4/6 & 4/7) for on 99 cents!) 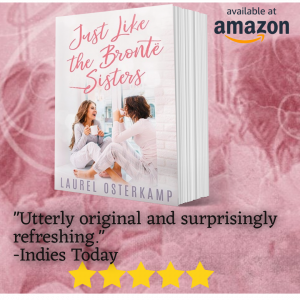