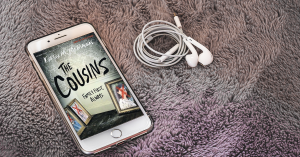 Lately, I have come to a new realization: I need to update my list of favorite authors to include Karen McManus. The Cousins is the third book by her I have thoroughly enjoyed. The first was One of Us is Lying, which I read on my Kindle. The second was Two Can Keep a Secret if One of Us is Dead, which I listened to on audio. Because of the title, I figured it was a sequel to One of Us… but the two books have no relation, other than they are both twisty, character-driven YA mysteries. The third, The Cousins, I also listened to on audio, and it was just as good as the other two novels.

In The Cousins, three teens, Millie, Aubrey, and Jonah, are cousins who barely know each other and who have never met their grandmother, Mildred Story. Shortly after being widowed, Mildred cut off all her four children, which included any future contact with them or their future children.  The Story family is wealthy and Mildred’s kids/the cousins’ parents would have been heirs to a resort hotel empire, but twenty-four years later, no contact has been made. The only goodbye Mildred’s kids ever got was a letter delivered from her lawyer, saying she was cutting them off because “you know what you did.”

That had lasting effects, and all four kids (who are now adults at the book’s beginning) have been traumatized in their own way. When Millie, Jonah, and Aubrey each get a letter inviting them to work at Mildred’s resort for the summer, saying she wishes to get to know them, their parents insist that they go. Once on the island with the resort, secrets and evidence of past grudges start to pile up, and soon no one can trust anyone else. The chapters rotate with the POVs of Millie, Aubrey, Jonah, and an eighteen-year-old Allison, Millie’s mother, and her account of what happened the summer before her family became estranged.

Karen McManus is just so good at writing believable and likable yet flawed characters. I love how her characters and the complexities of the dynamics between them drive her stories. I say that I read/listen to her books because I want to write YA and her books are super instructive. That is completely true. But I also really enjoy them. The mystery is unpredictable and I can’t write much more than that without giving major spoilers. But I highly recommend The Cousins.