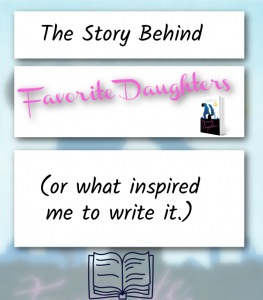 What Inspired Me To Write Favorite Daughters

But first, my step-father came up with the idea. In my family, we talk about politics all the time. The 2016 election was approaching, and we were discussing how strange it was that Chelsea Clinton and Ivanka Trump were friends. “You should write a novel about their friendship,” he said.

I loved the idea, but who was I to write such a thing? I was just an English teacher from Minneapolis. But I couldn’t let the idea go. It was so intriguing, even if I had no idea to write from the POV of a Chelsea or Ivanka-like character. Then it occurred to me: I could create a third character who’d be the narrator/protagonist. She’d be an outsider, unfamiliar with the world of power and privilege. If I took the angle of writing the story from her perspective, perhaps I could create something that would work.

But then, the world turned upside down.

I started writing it when everyone believed Hillary Clinton would win. I pictured a happy, triumphant ending. But then, well, you know what happened. Wednesday, November 8th, 2016 was heartbreaking for a lot of us, but for me, it was also a reckoning. How could I complete a novel that reflects real-life, when real-life had just gone off the rails?

My first “final” draft ended ambiguously, with room for hope but there was also darkness. I sent it out to many different agents, and one of them signed me on. But she wanted MAJOR revisions. She said the story was too close to what really happened. That I needed to make it more unpredictable. That the political events and the Hillary Clinton/Donald Trump characters had to deviate from what everyone already knew.

After I revised it and my agent sent it out, we got many rejections, and then it was time for more revisions. “Make it inspirational,” my agent told me. But how was I supposed to do that?

It just so happened that she gave me that note on the same day that a new Congress was sworn in after the 2018 midterms. That year, a record number of young women were elected as members of the House. I watched them getting sworn in, and I thought, “Now that’s inspirational.” Thus, my main character, Elyse, went from campaign worker, to journalist, to (finally) becoming a politician herself.

I finished the novel (for the last time) well before Covid or January 6th. Oh, and BTW, Chelsea and Ivanka are no longer friends. (You can Google it if you don’t believe me.) 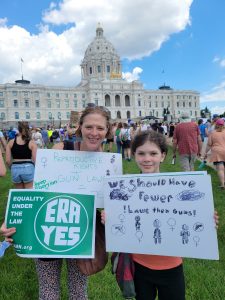 In retrospect, the events in Favorite Daughters seem sort of tame. But I am still so proud of the end result. Because, more than anything else, my novel is about the dynamics of female friendship, the balance of power, and how to find your voice. One day, when she’s old enough, I hope that my daughter Pauline will read it and when she does, I want her to understand that it’s a story of a young woman’s potential. And maybe she’ll be able to see her own, very real potential reflected back.