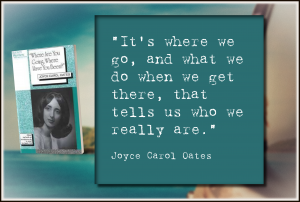 Joyce Carol Oates wrote “Where are You Going, Where Have You Been” back in 1966. Apparently the story was inspired by a Life Magazine article serial killer Charles Schmid, known as the Pied Piper of Tucson. Oates depicts a young girl who is both simultaneously terrorized and seduced by a magnetic man who is possibly the devil. (He might have hoofs underneath his cowboy boots). He never uses force, so how does he gain ultimate power over her?  Oates dedicated the story to Bob Dylan, because it was also inspired by his song, “It’s All Over Now, Baby Blue.”

Oates is in an incredibly prolific writer, having completed 58 novels in addition to four plays and numerous short stories. She’s been a Pulitzer finalist several times, and has won other awards, including a National Book Award. She is definitely a national treasure.