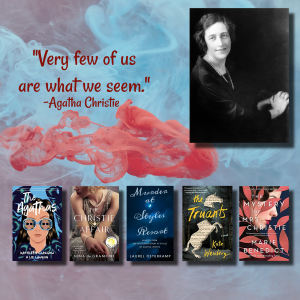 Agatha Christie has received a lot of attention lately, especially for someone who’s been dead since 1976.  Aside from the recent film adaptation of Death on the Nile, there’s been a rash of novels that are about her, or are inspired by her life/work. I’ve also seen her repackaged novels promoted on BookBub a few times.

Were her novels literary?

Agatha Christie is the best-selling novelist of all time, and she was incredibly prolific, having published a whopping 66 novels and 12 short story collections. At the height of her career, she’d publish a novel a year. But what did the critics think? It appears she was dismissed as “genre” fiction, and none of her novels are included in the cadre of now-classics written by other authors who wrote at around the same time, like F. Scott Fitzgerald, Kurt Vonnegut, and James Joyce. In fact, type “Best 20th Century Novels” into Google, and you’ll get hit with a bunch of lists like this one from ModernLibrary.com. They’ll tell you which novels are “best.” I only perused a few of these lists, but none of Agatha Christie’s novels were on any of them. The Modern Library’s list was overwhelmingly white & male, but others had more women authors. Still, no Agatha Christie on any of them.

Yet, it seems to me her image has improved somewhat over the years. Her fictional character, Hercule Poirot, was known for being a genius. Well, an author needs a touch of genius herself, before she’s capable of writing about one. Perhaps Christie didn’t write about life’s complexities, nor did she attempt to answer big, extensional questions. But her research was impeccable, and her plots came together masterfully, like pieces of a complex puzzle.

Was Agatha Christie a Feminist?

Yes, and no. Agatha Christie lived a traditional life, and she wasn’t one to preach or attempt to sway her readers with any controversial views. Yet, her novels and their characterizations tell a different story.

Gillian Gill, author of Agatha Christie: The Woman and Her Mysteries, says that Christie created active female characters, who were as likely to be murderers as they are victims. “In Christie’s books, the women are very ordinary. They can be sweet young things; they can be elderly spinsters. They are you and me, essentially.” This differs from most male-written detective stories of the same era, where female characters were passive, or they were evil seductresses. Christie also created a world where men and women worked together as equals, which Gill said was an unpopular notion, but also very hopeful.

What’s with the Agatha Christie obsession?

She’s a cultural icon. She wrote a huge amount of extremely popular novels. And, when she was in her thirties, she disappeared for around a week and told no one where she went. Several novels have been written about this, including The Christie Affair, by Nina de Gramont which I read and reviewed here. Another is The Mystery of Miss Christie, by Marie Benedict.

The Truants, by Kate Weinburg, is also novel that focuses on Agatha Christie’s disappearance, but as more of a backdrop for a deeper mystery. Hailed as similar to Donna Tartt’s The Secret History, The Truants tells the story of some literature students who become enamored with a professor who is, in turn, enamored with the work of Agatha Christie.

There are many more novels that focus on Agatha Christie, or on the idea of her. But I’ll just mention one more. The Agathas, by Kathleen Glasgow, is about a teen girl who disappears (a reflection of Christie’s disappearance, I believe) and her best friends who decide that the key to finding her is reading the complete works of Agatha Christie. I hope they know how to speed read! But seriously, this one is on my TBR list.

Murder at Styles Resort, is my adaptation of Christie’s novel, The Mysterious Event at Styles. It was her first novel that featured Hercule Poirot, and my version is a female-centric, modern day adaptation set in northern Minnesota. I learned a lot by taking a novel she’d written and changing it around, complete with gender reversals and 21st century updates. My biggest takeaway? Agatha Christie deserves her cultural icon-ness, not just because she wrote so many beloved novels that were also clever whodunnits. She was a trailblazer. She was a wonder.