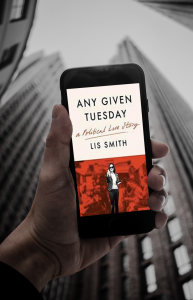 If you’ve heard of Lis Smith, it’s probably because of the tabloid coverage of the Lis Smith/Eliot Spitzer relationship. Or maybe you’re familiar with Lis Smith, political consultant, who worked for famed (and some disgraced) politicians like John Edwards, Barack Obama, Andrew Cuomo, and Pete Buttigieg. Well, now it’s time to become familiar with Lis Smith, author. She wrote an exciting new memoir, Any Given Tuesday.

Any Given Tuesday had me at its subtitle. “A Political Love Story”. I have lamented that there aren’t enough books about politics that are meant to appeal to women, and that most novels in the “political fiction” genre feature male protagonists, and covers with a man, silhouetted, running away from an exploding helicopter. Read my post about the lack of “Women’s Political Fiction.”

While Any Given Tuesday is not a novel, it is, in every other way, the type of book I wanted to write when I set out to create Favorite Daughters.

Lis Smith is a flawed but compelling heroine, who is extremely capable and savvy. She has no trouble fighting for a candidate she believes in, and she runs toward conflict, rather than away from it. Yet, she sees herself as an introvert, and describes her bouts with crippling stage fright. Her personal life is messy, but she is pro when it comes to her profession, and the details she describes are fascinating.

Smith’s memoir goes into detail about working for politicians like, among others, Claire McCaskill, Terry McAuliffe, Barack Obama, Eliot Spitzer (with whom she had a romantic relationship), and my favorite, Pete Buttigieg. Each chapter focuses on a different politician, and she uses loose relationship metaphors to title those chapters. McCaskill has the “It Factor,” McAuliffe is the “Life of the Party,” with Spitzer she has “Blurred Lines,” Obama was “The Machine,” and Buttigieg? He was “The One.” Seriously, it was great to find out that Buttigieg is as bright, kind, genuine, and talented as he seems. Reading the section about him made me fall in love with him as a candidate all over again.

Smith also worked for Governor Cuomo, and she describes how at first, she didn’t believe the accusations about him. Smith does not shy away from culpability and she doesn’t make excuses. Her tale is at once human and political, and that is a combination I just cannot resist. “I’d seen the worst of politics up close,” Smith states. “But I’d also seen the best of it.”

I loved, loved, loved this book. I hope we hear more from Lis Smith. Like perhaps another memoir, but this one could be about how she ran a campaign that got Buttigieg elected as President?

Buy Any Given Tuesday on Amazon