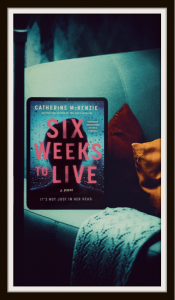 Catherine McKenzie has written another riveting novel, which is a mixture of domestic drama and psychological suspense. The protagonist is Jennifer, a 48-year-old grandmother (she had her daughters young) who, in the first chapter, discovers she has terminal brain cancer. Everything about Jennifer’s life has been unexpected, and now her death will be the same.

Jennifer dropped out of med school when she became pregnant. Later, she found out that she had triplets, but two of them were identical twins, and the third baby was their fraternal triplet. This is INCREDIBLY rare, and Jennifer, who is extremely bright, made the best out of raising her three exceptional children when she was nearly still a child herself. She maintained that her three daughters, Emily, Aline, and Miranda, were the best things that ever happened to her. And yet, she suffers nonetheless, needing more personal or professional fulfillment.

Then, she gets the news that her headaches are from a brain tumor, and she has approximately six weeks to live. At first, Jennifer thinks she will spend her remaining time enjoying the company of her daughters and grandchildren (she and her husband are separated), but then she sees the result of an old blood test result that shows exposure to a lot of lead. The doctor’s office insists they called her about this at least twice, and that she told them she would get a second opinion. But Jennifer has no memory of this. Now she feels torn. Does she let it go so she can spend her last days in peace, or does she try to solve the mystery of her lead poisoning? Because what if she was murdered?

Her estranged husband is her number one suspect, and Jennifer enlists the help of her daughters to solve the mystery. What Jennifer doesn’t understand is that Emily, Aline, and Miranda each harbor secrets and resentments. As the chapters alternate in point-of-view between Jennifer and each of her daughters, layers are pulled back, and the reader comes to understand that nothing is as it seems. The novel becomes two things at once: a story of making amends and finding peace, and a psychological thriller that keeps the reader guessing until the very end.

I am a huge Catherine McKenzie fan (read my review of You Can’t Catch Me) and have read nearly every book she’s written, and she’s very prolific! This is another fabulous novel that examines how we deal with tragedy and loss when we’re in the midst of it, all while presenting a complex mystery with more than one unreliable narrator.

In the end, while there are straightforward answers, none of them are easy. Yet the writing is clear, strong, and vivid, without becoming pedantic. Her characterization and dialogue are, as always, huge strengths, and this was another novel of hers that I got lost in.

Six Weeks to Live has me counting down the weeks to the release of McKenzie’s next novel.